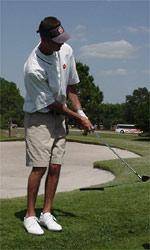 Clemson, SC – Clemson will travel to Statesboro, GA for the Chris Schenkel E-Z-Go Invitational this weekend. The 54-hole event will be played at the Forest Heights Country Club, a par 72 layout that is 6945 yards in length. The 15-team field will feature nine of the top 21 teams in the nation and 10 of the top 20 players nationally. The teams will play 36 holes on Saturday and 18 on Sunday.

In addition to Clemson, the nation’s second ranked team, third-ranked Wake Forest, fourth-ranked Florida and fifth-ranked Tennessee will also be in action. Overall, five ACC teams will be competing. Joining Clemson and Wake Forest will be Duke, NC State and North Carolina. Georgia Tech, the nation’s top ranked team, has the weekend off.

Clemson will take three golfers to Statesboro who competed last year. In addition to Trahan’s third-place finish, Ben Duncan recorded his first career top 15 with a 216 score, even par, and good enough for 15th place. Then freshman Gregg Jones shot a 227 and finished 57th.

In addition to Trahan, Duncan and Jones, Larry Penley will bring sophomore Matt Hendrix and freshman Jack Ferguson to the Schenkel. Trahan, ranked third in the nation individually, has a 70.29 stroke average for his eight events this year. He has scored at par or better in 21 of his 24 rounds so far this year.

Jones is ranked 15th in the nation with a 72.23 stroke average. He is coming off back-to-back top five finishes for the first time in his career. He was fourth at Puerto Rico and fifth at Las Vegas. He actually has a better stroke average than Trahan over the last two events.

Duncan has also been playing his best golf as a Tiger. He was a career best 11th with a career best 214 tournament score at Puerto Rico, then finished 19th in Las Vegas. Hendrix has been consistent, finishing between 26th and 37th in all seven of his events so far this year. He shot 220 for the Tigers in Las Vegas, Clemson’s most recent event. Jack Ferguson returns to the lineup this weekend. Ferguson has a 74.53 stroke average for the year.