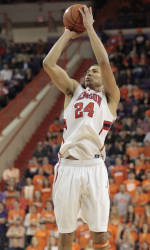 Clemson Travels to Chapel Hill, NC to Face No. 8/7 North Carolina on Saturday

QUICK FACTS  Clemson and North Carolina will play the 146th game in series history Saturday, a history that has largely been in the Tar Heels’ favor. Clemson is seeking its first win in Chapel Hill.  The two schools played three close games in 2010-11, Brad Brownell’s first season at Clemson. The Tar Heels won all three meetings, prevailing 75-65 in Chapel Hill, 64-62 in Clemson, and 92-87 in overtime in the ACC Tournament semifinals at the Greensboro Coliseum.  Clemson enters the game fresh off a 60-48 upset of No. 22 Virginia at home on Tuesday, Feb. 14. The Tigers forced 17 UVA turnovers and shot 54 percent in the second half to pull away after the score was tied 24-24 at halftime.  Clemson is now 12-1 when holding opponents to 50 points or less under Brownell, including 5-1 versus ACC teams.  Saturday’s matchup features the ACC’s highest scoring team, as North Carolina averages 83.1 points per game, and the league’s second-best scoring defense in Clemson, who gives up just 59.8 points per game.  The ACC’s two best ball-handlers will be on display Saturday. UNC’s Kendall Marshall leads the league with a 3.41-to-1 assist-to-turnover ratio, while Clemson senior Andre Young is second with a 2.96-to-1 figure.  Young has scored double figures in six of the last seven games and has had just five turnovers over that same time frame, a stretch of 239 minutes.  Milton Jennings has been at his best against North Carolina, averaging 9.8 points per game in four contests with the Tar Heels. Last season, he posted a double-double at home and then scored 16 points and added seven boards in the semifinals of the ACC Tournament.  Tanner Smith had four steals in the win over Virginia to reach 150 for his career, meaning he and fellow senior Young (178) are the first classmates at Clemson to both record at least 150 steals since Cliff Hammonds and James Mays in 2007-08.  Devin Coleman is coming off back-to-back games in which he scored nine points off of four field goals. He had just two made field goals in the Tigers’ first 23 games of the season.  Clemson announced it will hold an alumni game on Friday, Feb. 24, the weekend of the school’s 100th anniversary celebration for the NC State game.