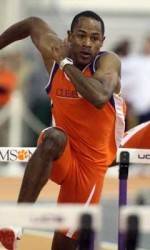 CLEMSON, SC – Clemson will take its track & field teams to Birmingham, AL on Friday and Saturday to take part at the 2012 Auburn Invitational. The meet will be held at the new CrossPlex indoor facility, a hydraulic banked track that will host many strong programs from across the Southeast region this weekend. Alabama, Auburn, Clemson, Florida State, Georgia, Mississippi, Mississippi State, Samford, South Carolina, Tennessee, Texas and UCF are all slated to bring teams to the meet this weekend.

The only action Friday will be in the men’s and women’s weight throw competitions. Marcus Brown, a mid-year enrollee who competed his first two seasons at Maryland-Eastern Shore, will make his Clemson debut in the weight throw Friday at 5 PM. Brittney Waller will follow in the women’s weight throw at 7:00. Brown will also compete in his best event, the shot put, Saturday at 2:00 PM.

Saturday’s action will feature several of Clemson’s best performers. Clemson will debut its athletes in the 200 and 400 on Saturday, and the Tigers should have many impact contributors in those two sprints.

The Tigers will continue to run student-athletes in the 60 hurdles and 60 dash. The prelims for the hurdles are at 1:30 PM, starting with the women and continuing with the men at 1:45. Clemson will roll out a quartet on the women’s side, led by reigning ACC Performer-of-the-Week Brianna Rollins. She will be joined by Jasmine Edgerson, Keni Harrison and Bridgette Owens. The women’s hurdle final is set for 3:10.

Spencer Adams headlines a group of four entered in the men’s high hurdles. Clemson will welcome Charlton Rolle in his return to the track after red-shirting the 2010-11 seasons. He is a former NCAA regional qualifier outdoors in the hurdles and hails from Winston-Salem, NC. The men’s final is scheduled for 3:15.

The prelims for the 60 dash will follow the hurdles. Stormy Kendrick again leads a strong group for Lawrence Johnson’s team, and she will be joined by freshman standout Dezerea Bryant among others. In the men’s 60, Warren Fraser will take to the track to join teammate Justin Murdock in the event. Murdock ran a strong 6.68 last weekend at Virginia Tech. The finals for the 60 begin at 3:20.

The 400 will be held at 3:45 PM, beginning with the women’s competition. Clemson will hold its top performer in the event, La’Mont Jackson is the lone quarter mile entry from the Tiger men’s team.

The 800 will be held between the 400 and the 200. The men’s team will send a slew of athletes, including two-time All-ACC runner Chris Slate, as well as Nathan Hendershot and Aaron Ramirez.

The 200 will feature Bryant, Kendrick and Wesh from the women’s squad at approximately 4:50 PM. The men’s race will follow and will include Clemson’s Fraser and Murdock.

On the distance side, Alyssa Kulik and Kim Ruck are both slated to be in action Saturday. Kulik is entered in the mile run at 2:35 PM, while Ruck is scheduled for the 3000-meter competition at 5:20. Ty McCormack will follow Ruck in the men’s 3K.

In the field, Clemson will enter several in the men’s jumps and shot put Saturday. The high jump, featuring freshman Torian Ware, is set for 10:30 AM. The long jump will follow at 11, with the triple jump scheduled to start 30 minutes following the conclusion of that event. The women’s team will compete Jasmine Brunson in the horizontal jumps, and Christy Gasparino and Lauren Terstappen in the pole vault at 11.

The Tigers return home next weekend to host a number of teams in the Clemson Invitational. The meet will be held at the school’s indoor facility Friday and Saturday.