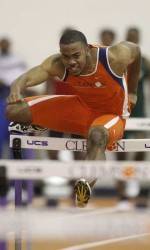 CLEMSON, SC – The Clemson track & field program will play host to the Tiger Tuneup on Saturday at the school’s indoor facility. A total of 10 schools will compete in the one-day event. It will serve as Clemson’s final preparation for next week’s ACC Indoor Championships, held Feb. 25-27 in Blacksburg, VA.

Only a handful of competitors from Clemson are entered in the meet. Multi-event athletes such as Liane Weber and Patricia Mamona are slated to compete, albeit only on in the women’s shot put at 12 PM. Mamona has already posted an NCAA provisional point total in the pentathlon, while Weber is the defending league champion and ACC record-holder in the five-event competition.

Miller Moss, a provisionally qualified heptathlete for the men’s team, will also compete in the shot put Saturday. Moss broke the Clemson school record in the heptathlon after tallying 5,653 points over a two-day span in late January.

Other field event participants Saturday for the Tiger program will include Carlin Bartlett in the women’s pole vault, and Will Robinson in the men’s long jump. Each of those events is slated to start at 11:00 AM.

On the track, Clemson will enter a minimal amount of competitors. Freshmen Claudio Delli Carpini and Dailyn Moore are entered in the 60 high hurdles, with prelims at 12:40 and finals at 1:35 PM. The Tigers will enter multiple student-athletes in the 800m run, including Ryan Mangone and Chad Holt from the men’s team (1:50 PM).

The first track event is scheduled to begin at 1:00 PM Saturday.