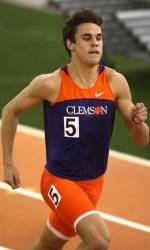 CLEMSON, SC – The Clemson track & field program will travel its teams to Gainesville, FL this weekend to compete in the Pepsi Florida Relays. The meet will be held at Percy Beard Track and will be Clemson’s final tuneup prior to the ACC Outdoor Championships, which are scheduled for April 19-21 in Charlottesville, VA.

Twenty-eight members of the third-ranked women’s team will make the trip to James Pressly Stadium and will be joined by 22 student-athletes from the Tiger men’s team. The meet begins for Clemson on Friday, April 6. The first event will be the women’s 100-meter hurdles, featuring five entries from Clemson’s program. The men’s 110 hurdles will follow with four Tiger athletes.

Also on the track for Friday’s afternoon session will be the men’s and women’s 800 meters, as well as the 400 hurdles. Brianna Blanton will be pushed by senior Alyssa Kulik in the 800, while Nathan Hendershot and Chris Slate highlight Clemson’s entries in the men’s 800. Those races are set to begin at 4 PM. The 400 hurdles follow, with Spencer Adams leading the men’s team and Sonni Austin and Marlena Wesh pacing a group of four for the women.

Friday’s field events feature the pole vault, long jump, discus and javelin for the women’s team. April Sinkler and Jasmine Brunson will compete in the invitational section of the long jump at 6:00 PM. Clemson’s top two vaulters in history, Lauren Terstappen and Christy Gasparino, will compete early in the day at 3. The men’s long jump and discus will take place Friday as well.

The late session on Friday will include the 1500 meters, men’s steeplechase and women’s 5K. Natalie Anthony and Kim Ruck will join forces with Kulik in the 1500, beginning at 8:00. In the men’s steeple, sophomore Ty McCormack will make his first run of the season in that event for the Tigers at approximately 8:55. McCormack was an NCAA East Preliminary Round qualifier last season.

Saturday’s action will begin with the field events, featuring Marcus Brown and Cory Thalheimer in the invitational section of the men’s discus at 11:00. Brittney Waller will follow at 11:30 in the women’s hammer throw. Also in the field Saturday, freshman Shai Carpenter will try and improve upon his fifth-best triple jump in Clemson history at 1:30 PM. Sinkler and Brunson are slated for the women’s triple jump at 4:00.

The track events Saturday will consist solely of relays. The first scheduled relay for Clemson will be the sprint medley events, starting with the women at 12:00 PM and the men at 12:15. Clemson will field one team apiece in the shuttle hurdle relays, beginning at 12:30. The 4×100-meter relays take to the track at 2:20 PM, followed by the 4×200 groups at 4:10. The final event of the meet will be the 4×400-meter relay, with the women’s races at 6:40 and men’s competition at 7:05.