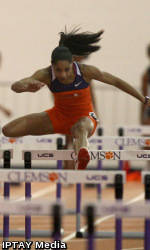 CLEMSON, SC – The Clemson track & field program will take to the road this weekend to compete in one of the top meets of the indoor season, the New Balance Invitational in New York City. The meet will feature some of the best teams from around the country at New York’s Armory.

Clemson will send a full squad of student-athletes from its men’s and women’s teams. Some of the nation’s best will be in action, including sprinters Stormy Kendrick and Dezerea Bryant. Both are slated for the championship section of the women’s 60-meter dash Friday, along with the versatile Jasmine Edgerson.

Edgerson will double and compete in the 60-meter hurdles as well on Friday, alongside the nation’s No. 1 ranked athlete in the event, defending NCAA champ Brianna Rollins. The Tigers will also send Monique Gracia, Keni Harrison and Bridgette Owens in the high hurdles.

Other individual events that will be held Friday include the men’s 60 hurdles featuring a strong quartet of Tigers, led by one of the nation’s best in Spencer Adams. He will be joined by Elijah Britton, Marcus Maxey and Charlton Rolle in Friday afternoon’s qualifying heats.

The 400 prelims will be conducted Friday, with the championship finals set for Saturday afternoon. Clemson’s top competitor in the quarter mile is 2011 first-team All-American Marlena Wesh, and she will be joined in the event by Sonni Austin, Nia Fluker and Brittany Pringley.

Friday’s field events will include the pole vault, long jump and shot put. Lauren Terstappen is one of two entries in the championship section for the women, and she is fresh off a record-setting performance from last weekend. The long jump will feature 2011 NCAA outdoor participant Jasmine Brunson. In the shot put, transfer Marcus Brown is one of three entries for the Tiger program.

Saturday’s events get underway early with the collegiate sections of the 3000 meters. The mile immediately follows, and then the championship prelims for the 200-meter dash. Bryant and Kendrick are also entered in that event, along with Edgerson and Owens as well. The 200 finals are set for the afternoon.

Kim Ruck is scheduled for the 3K championship around 3:00 Eastern time on Saturday. She is Clemson’s indoor record-holder and a former All-American in the event. Hendershot and Slate follow minutes later in the championship section of the men’s 800 meters. Also in the distance events, Kulik will compete in the women’s championship mile at 5:20 PM.

In the field Saturday, Brittney Waller is scheduled to compete early in the women’s 20-pound weight throw. Brunson and men’s freshman Shai Carpenter are also slated for the triple jump Saturday afternoon.

The finishing events for the New Balance Invitational are the 4×400-meter relays. The women’s championship heats are set to go off at 5:45 PM, followed 10 minutes later by the men’s races.