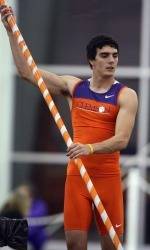 CLEMSON, SC – The Clemson track & field teams will travel to Philadelphia, PA to historic Franklin Field to compete in the 116th Penn Relays, the world’s oldest and largest track & field carnival. The Tiger women, fresh off their fourth straight ACC team championship, moved up a spot to No. 4 in Tuesday’s national ratings. The Tiger men’s team is coming off an improved ACC showing, as they finished fourth last weekend in Durham, NC.

Clemson will travel a squad of 29 student-athletes to Philadelphia, 15 from the women’s team and 14 off the men’s roster. The Tigers will compete in multiple relays each day, with a few individual events sprinkled in as well.

The first action for the Tigers will be the women’s pole vault at 10:00 AM. Lauren Terstappen, the ACC’s runner-up last weekend after establishing a school record (13’3.75″) in the event, will compete alongside fellow freshman Christy Gasparino.

All other individuals in action Thursday will come from the distance groups. Ty McCormack will run the championship section of the men’s 3000m steeplechase at 7:30, followed by Stephanie Buffo and ACC runner-up Alyssa Kulik in the women’s steeple at 8:00. Kim Ruck will finish out the evening by running the championship 5K section at 8:40. Ruck is coming off an ACC championship in the 10K.

On Friday, the men’s pole vault will take place at 10:00 AM and will feature freshman Michael Kopanski. Also in action Friday, Josh Fowler and Will Robinson will compete in the collegiate section of the men’s long jump at 3:30.