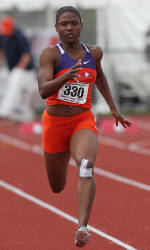 CLEMSON, SC – A total of 33 student-athletes from the Clemson track & field program earned official bids to the NCAA East Preliminary Round. The NCAA released the list of accepted entries on Thursday for the outdoor first and second round meet, scheduled for May 24-26 in Jacksonville, FL. The top 48 declared individuals and top 24 relays were extended invitations. This is the third year the NCAA outdoor national meet qualifying format will feature two preliminary round sites – East (Jacksonville) and West (Austin, TX). The final rounds of the NCAA Outdoor Championships will be held Jun 6-9 in Des Moines, IA.

Eighteen members from the ACC Championship and fifth-ranked women’s team earned spots in next week’s preliminary field. Clemson also qualified the 4×100 and 4×400-meter relays from the women’s team.

Clemson is represented in every area of track & field, led by five in the 100-meter hurdles. Clemson’s five high hurdlers were the second-most entries for any women’s team in a single event. Only Florida State had more accepted entries for an event, with six in the 1500 prelims.

Seven females from Clemson were declared for multiple individual events, led by Jasmine Edgerson in three. Edgerson qualified in the 100, 200 and 100 hurdles. She is seeded in the top 13 of all three events, while also contributing as a mainstay as the Tigers’ anchor leg on the 4×100 relay.

Edgerson was one of four to qualify in the 100-meter dash, along with Dezerea Bryant, Monique Gracia and Stormy Kendrick. Bryant and Gracia also qualified in multiple events. Bryant is the No. 6 seed in the 200 dash, while Gracia is also seeded sixth for the 100 hurdles.

Marlena Wesh qualified in both the 200 and 400, but will focus of advancing in the quarter mile, where she holds the top seed in the East. She will be joined in the 400-meter dash by freshman Nia Fluker and red-shirt sophomore Brittany Pringley.

Brianna Rollins and Bridgette Owens lead Clemson’s group of five entries in the women’s 100 hurdles. The two have the second and third-best seed times among the 48 participants. Rollins returned to action last weekend, while Owens won the ACC Championship in the event in April. Joining them in the hurdles field are Edgerson, Gracia and freshman sensation Keni Harrison, who is ranked among the top 10 in the East Region in both the high hurdles and intermediate hurdles. She was the ACC’s 400-meter hurdles champ last month.

Alyssa Kulik is the top-seeded female in the 3000-meter steeplechase. She won the ACC Championship in the event, a first for Clemson, in meet record fashion (9:52.90). Also slated for the distance events will be Natalie Anthony in the 5K, and Kim Ruck in both the 5K and 10K.

April Sinkler once again led the Tiger field event qualifiers. She will compete in three jumps for the second straight year, the high jump, long jump and triple jump. Last year, she advanced to the NCAA Outdoor Championships in all three. Christy Gasparino qualified for the second straight year in the pole vault, while Jasmine Brunson will compete in the triple jump alongside Sinkler. In the throws, Brittney Waller will participate in the discus next week.

The Tiger men’s team had 15 total athletes qualify, including three in more than one event. The men are led by Spencer Adams, who will compete in only the 110 hurdles next week. He was ACC runner-up in both the 110 and 400 hurdles, and is seeded third in the in the high hurdles amongst East Region qualifiers. He will be joined in the 100 hurdles by Marcus Maxey, Charlton Rolle and Elijah Britton, the last declaration that was accepted into the event.

Warren Fraser and Justin Murdock qualified in both short sprints for the Clemson men’s squad. Fraser is 18th on the descending order list among those that declared for the 100 dash, followed one spot later by Murdock. Fraser is higher in the 200, seeded 21st overall with a time of 20.85.

Aaron Ramirez was a third men’s team member to earn preliminary spots in two events. He will compete in the 800 meters and 1500 meters. Ramirez is actually one of three Tigers to qualify in the 800, joining All-ACC performer Chris Slate and sophomore Nathan Hendershot. Ramirez was fourth at the ACC Outdoor Championships in the 1500.

Ty McCormack is the only men’s team member slated for longer distance. He will compete in the 3000-meter steeplechase for a second consecutive season.

Clemson has a total of five qualified athletes in the men’s field events, including three freshman jumpers. Jameel Abdul-Mateen will long jump for the Tigers.

Marcus Brown and Cory Thalheimer will represent the throwers at the NCAA East Prelims. Brown comes in with the better mark, throwing 56’9.5″ at the ACC Championships. Thalheimer earned his spot at the Tiger Qualifier last week with a season-best throw of 55’10.25″.