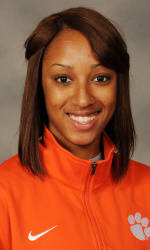 CLEMSON, SC – The U.S. Track & Field and Cross Country Coaches Association officially recognized all of the 2012 first- and second-team indoor All-Americans late Monday. Clemson had seven first-team and three second-team performers according to the organization.

The women’s team, which finished tied for fifth at the NCAA Indoor Championships last weekend, had six first-team performers. Leading the way were 60-meter hurdlers Brianna Rollins and Bridgette Owens, who finished second and third, respectively, at the NCAA national meet. It was Rollins’ second straight first-team honor in the event and the fourth All-America accolade of her career. For Owens, she was a first-team All-American for the first time in her young career.

Also garnering first-team All-America accolades for the 2012 indoor season were Dezerea Bryant, Marlena Wesh and Jasmine Brunson. A freshman from Wisconsin, Bryant capped a brilliant rookie campaign with a pair of top-seven finishes in the short sprints. She was sixth in the 60-meter dash and seventh in the 200. She is the first Clemson female to be first-team All-American in both events in the same season.

Wesh was fifth in the 400-meter dash, while Brunson placed eighth in the women’s triple jump. For Wesh, it marked her second consecutive first-team indoor All-America certificate in the 400. It was also the highest finish in the event ever by a Tiger female. Brunson is the third straight Tiger to earn first-team All-America honors in the triple jump, following Patricia Mamona (2010) and April Sinkler (2011).

A trio of Tiger females were second-team All-Americans. Jasmine Edgerson and Stormy Kendrick earned the honors in the 60 dash. Kendrick pulled up in the final 15 meters and was forced to withdraw from the 200 prelims as well. It was her fourth All-America accolade of any kind. Edgerson now has five career All-America accolades, including three straight indoors. Keni Harrison was a third member of the team to earn second-team All-America status, finishing 14th in the 60 hurdles in her first trip to nationals.

Spencer Adams was the only member of the Clemson men’s team to qualify for the NCAA Championships, but he finished fifth in the most competitive event of the entire meet last Saturday. Adams was fifth in the 60 hurdles final, but matched Duane Ross’ Clemson record with a time of 7.60. He now has a pair of first-team honors in the 60 hurdles under his belt and five career All-America accolades.