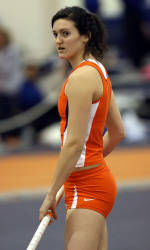 GREENSBORO, NC – The Atlantic Coast Conference announced its 2008-09 All-ACC Academic Outdoor Track & Field Teams on Wednesday. Clemson placed five student-athletes on the two teams, one from the men’s side and four females. This season marks the first time the conference has differentiated teams between the indoor and outdoor seasons. Clemson had seven selections to the indoor teams, thus the Tiger program has a total of 12 honorees from this past track & field season.

Clemson’s female student-athletes earning recognition from the ACC for the 2008-09 outdoor season are Nikola Lomnicka and Kim Ruck. On the men’s side, Miller Moss has earned the honor for the second time in his career.

Buchholz, Kennedy and Lomnicka have all previously been named All-ACC Academic for track & field. Buchholz, a junior from Bad Segeberg, Germany, was All-ACC on and off the track in 2009. She placed third in the javelin throw at the ACC Championships, her second career all-conference honor in the event. Buchholz is a marketing major at Clemson, and she previously was named All-ACC Academic for track & field in 2007 as a freshman.

Kennedy, a junior from Orlando, Fla., sports a cumulative 3.30 GPA in health science. On the track, she was Clemson’s top performer in the women’s pole vault. She finished sixth at the ACC Championships in the event after posting a school record with a 12’9.5″ clearance. This is Kennedy’s fourth overall All-ACC Academic honor. She was an indoor selection as well, as announced in June by the conference.

Lomnicka earned her second All-ACC Academic honor of the season. Lomnicka was All-ACC during the outdoor season in the hammer throw with a runner-up finish.

Ruck, a newcomer to the distance squad in 2009, earned her first-ever academic honor for track after a 3.87 GPA for the year. She competed in the 10K at the ACC Championships and was a fifth-place scorer in the event, despite no previous experience in track prior to the season. Ruck was honored last fall as a member of the 2008 All-ACC Academic Team for cross country.

Moss, a native of Sumter, S.C., was the lone selection for the men’s team. He competed at the NCAA Outdoor Championships in the decathlon before sustaining an injury that shortened his first-ever trip to nationals. Moss was a 2008 All-ACC Academic Team selection as well.