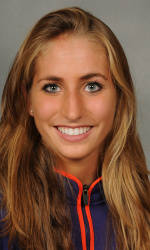 CLEMSON, SC – The Clemson track & field teams played host to their final indoor meet prior to next week’s ACC Championships on Saturday, the Tiger Tuneup. Lawrence Johnson, Clemson’s Director of Track & Field, elected to compete only a handful of student-athletes on Saturday with the championship meet just five days away.

Christy Gasparino won the women’s pole vault. The freshman from Darien, CT cleared a personal best 12’0″ on her third and final attempt. She moved to ninth place on Clemson’s all-time indoor performance list with her effort Saturday.

Stephen White won the men’s shot put. The Beaufort, SC product hit a mark of 52’5.25″ on his final throw of the afternoon. Teammate and NCAA heptathlon leader Miller Moss also competed in the shot put and finished 10th with a mark of 40’5.5″.

Thor Serafenas, a freshman out of Olney, MD, placed third in the men’s 35-pound weight throw. He hit a personal best with his second throw of the preliminary round, recording an official mark of 56’3.75″. His mark tied for ninth-best in Clemson history with Derek Gilson, who accomplished the feat in 2004.

Will Robinson finished fourth in the men’s long jump. The sophomore put together a top leap of 22’1.75″ on his first attempt of the afternoon.

The conference indoor meet will take place Feb. 24-26 of next week at Rector Field House on Virginia Tech’s campus.