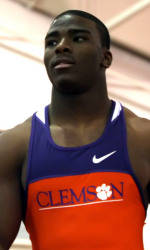 For most fans that follow Clemson athletics, the name Jacoby Ford is one readily associated with football. What most people may not know, however, is that he is currently tied for the third-fastest time in the world in the 60 meter dash. Speed, a skill he is clearly known for on the gridiron, has allowed him to excel in a different arena: the track.

This indoor track season, Ford beat his own personal record in the 60 meter dash with a time of 6.51, the fastest time in the NCAA right now. Before that, he had already set the Clemson record in 2007 with a time of 6.52, a mark he has reached numerous times. With his time of 6.51 at the ACC Championships during the last weekend of February, Ford once again became the ACC Champion in the event and earned himself a ticket to the national meet in College Station, TX this weekend.

“I was extremely happy about winning ACC’s this year because I wasn’t able to compete last year indoors at ACC’s and I really wanted to,” said Ford. “I’m glad I could come back this year and have a really strong campaign so far in the indoor season. I went out there and performed very well and I was pleased with my time.”

A trip to NCAA’s to end the indoor track season is yet another impressive finish to an already extraordinary track career for Ford, who excels due to a combination of hard work, refinement, and a phenomenal amount of natural skill. Someone who watches him on the track might think that he has spent most of his life training to get to this level. Surprisingly, he had only one year of experience prior to the start of his track career as a Tiger.

Ford began running track in 2005 during his senior year at Cardinal Newman High School in West Palm Beach, FL. Though it was his first year, he won the state championship in both the 100 meter dash (10.32) and the 200 meter dash (21.25). These victories came naturally to Ford, who ran track on the side of his football career. With this success, Ford decided to continue his track career at Clemson, but again, in addition to his first sport of football.

In the 2006-2007 indoor track season, Ford established himself as one of the best sprinters in Clemson history, especially for a freshman. He was the ACC Champion in the 60 meter dash with a time of 6.52, which was the fastest time in the country. This honor had last been won by fellow two-sport athlete Tye Hill in 2004 (Hill now plays for the St. Louis Rams).

Ford recalls this race as his most memorable. “It was exciting to win ACC’s here at Clemson my freshman year with such a good time. That was pretty good for me.”

Ford also earned All-ACC honors with a third place finish in the 200 meter dash in a time of 21.43 seconds. This performance earned him the honor of ACC Indoor Freshman of the Year. He placed third at the NCAA Championships in Fayetteville, AR, behind teammate Travis Padgett with a time of 6.60, the first time in Clemson history that two student-athletes placed in the top three of the same event at nationals. Padgett won the event, and is now pursuing a professional track career under the sponsorship of Adidas. Ford earned all of these honors in his first attempt at indoor track, and the outdoor season hadn’t even begun yet.

During the outdoor season Ford was a part of the 4×100 meter relay team that finished runner-up at the East Region Championships and ran at the national meet in Sacramento, CA, though they were slower due to injury. He qualified for regionals in three different events: 100m, 200m, and the 4x100m relay. A false start in the 100m dash eliminated him from the event, but he placed fifth in the 200m in the ACC.

Competing in his freshman season against perhaps his best opponent in Travis Padgett allowed Ford to benefit greatly. “I definitely think it made me work harder and that it made those guys work harder too. Travis and I always brought out the best in each other, even though I was always like a little rabbit to him, and he was a rabbit to me at times. We pushed each other a lot in practice, and we always took it competitively. We would help each other out by critiquing each other in practice and it carried over to every meet that we went to, and that’s how we were able to perform well.”

With such a successful freshman campaign, Ford was ready to take on the challenge of improving and excelling the next year. Unfortunately, he was not able to defend his ACC title the next year. As football fans may well know, he suffered a broken ankle in the win against Maryland in the 2007 season and was out for the entire indoor track season, and most of the outdoor season as well. In the only three meets (nine races total) that he ran in that season, he placed second in ACC’s only to teammate Travis Padgett. He earned an automatic qualification to NCAA’s with a time of 10.21 in the 100m dash and later placed fifth in the National Championships, which earned him All-America honors.

“Last year my ankle was still bothering me a lot during my outdoor season, but I really never said anything about it. Running helped me for football, because track strengthened it up and got the endurance back in my ankle so I was able to compete during football season and carry it over to track. I couldn’t run indoor last year even though I thought I was ready. The doctors wouldn’t let me run, so I was upset about that last year but I’m really glad to be back this year running track.”

Ford actually won the Brandon Streeter award this past year based on his sophomore track campaign. It is an award given to athletes who come back from injury to excel both in the classroom and in athletics. His case was a little more unusual than normal, because he was injured in one sport and came back to excel in another.

Now in his junior year as a two-sport athlete, Ford has come to realize that the two sports complement each other well. “I think they both help each other out, because in football the way you load up on weights during the off season helps you with your explosion out of the blocks in track, and then track transitions over to football by keeping you in shape. Even though you get a little thinner, you still stay strong and it helps you to be faster in football. They pretty much even each other out.”

For Ford, the coaching changes experienced during football season have been duplicated at the track. Lawrence Johnson, a former assistant track coach at Virginia Tech, was named the new director of Clemson’s track and field programs. His changes have already begun to take place, and as a result both the men’s and women’s teams have improved significantly. For Coach Johnson, the skill already present in Ford is definitely something that is welcomed openly.

“Jacoby is overall just a good athlete. I think he brings a very impressive skill set with him already, so he makes our jobs easy in terms of that all we have to do is maybe teach him the finer points of sprinting. He has learned a lot about refining his skills. Naturally he’s gifted, and you can’t take that from him, so what we are teaching him is how to use his skills more efficiently and helping him to refine his skill set. He has a great attitude.”

Ford approves whole-heartedly of the new staff. “They’re very fun, energetic, and they know what they’re doing with the whole sprint group. I think they’re going to be a great program in the years to come. I’m just glad that I and all the other guys with experience can come out there to help them have a great campaign, a great season, and also to help with recruiting. If recruits see us sprinting well then they’ll know that Clemson has some great sprinters, and help us to continue that in the years to come.”

As one of the fastest sprinters in the world in the 60m dash, Ford has returned to the glory of his freshman season. With his newly posted time of 6.51 in the event, he improved upon his already fastest time in Clemson history.

“This year I feel like I’m a lot stronger in all of my races. I’m trying to be more of a technician, but still just running because that’s just what I do. I try not to change it up too much, so the coaches try not to mess with my running style but instead show me other things to enhance it so I can get better.”

“I definitely have to say it is a blessing to be able to go out there and run even faster than I did my freshman year. I am really pleased with the way that I’m running so far this year, and I hope to be able to take it to nationals in a few weeks. It feels really good to know that, while I’m still in college, I can be called probably one of the fastest in the world in the 60, if not the fastest. As a guy that plays football most of the time, and just goes out to run track for fun, it’s a great feat.”

And whether you’re a fan of Jacoby Ford in football or in track, there is no denying that.