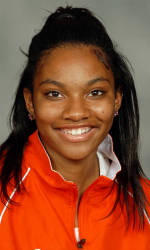 When interviewing April Sinkler, I asked her what her most memorable moment has been thus far as a Clemson student-athlete. It came as no surprise that she said, “this year’s ACC Indoor Championships.” Sinkler, a sophomore member of the women’s track and field team, had an impressive showing at the meet.

Sinkler won both the high jump and long jump, making her the first female from Clemson to win multiple events at the ACC Championships since Gisele Oliveira in 2005. Further, her mark of 21’4.25″ in the long jump and 5’11.5″ in the high jump set school records. Her performance earned her the title of ACC’s Most Valuable Field Event Athlete. Clemson went on to finish third at the ACC Indoor Championships, with Sinkler leading the way.

Years ago, Sinkler could not have imagined the success she would have in track and field.

“Track had always been a side thing,” said the Virginia native. “I played soccer since I was five and thought about having a professional career in the sport. It wasn’t until the professional league shut down that I decided to take another route.”

That route came in the form of being a jumper for her high school track and field team.

“I have been a jumper since I was in the seventh grade,” said Sinkler. “I don’t consider myself a runner. I’ve always been a jumper.”

Sinkler became an accomplished jumper at Brooke Point High School. Under the mentorship of head coach Joe Ocheltree, she won four events at the Commonwealth District meet in 2007. In the Northwest Region meet that same year, Sinkler won every jumping event. As a result, Free-Lance Star named Sinkler the 2007 Female Track & Field Athlete-of-the-Year and she garnered All-State honors in the high jump, long jump, and triple jump. Arguably her biggest feat came when she took first-place honors in the high jump at the Nike Outdoor Nationals in 2007.

As high school came to an end, Sinkler’s goals had changed too. Sinkler now focused whole-heartedly on jumping. To that end, she chose to take an official visit to Clemson. It would be her only visit to a college.

“Choosing Clemson was an easy decision,” said the sophomore jumper. “It was far enough away from home, but still close enough to drive to. When I came to visit everyone was really welcoming. I knew this was the place I wanted to be.”

Sinkler entered Clemson in the fall of 2007. Collegiate track and field proved to be much different than high school.

“The coaching was the biggest change,” said Sinkler. “I have more direction now in terms of practice. Practice is much more intense in college.”

Sinkler adjusted well to the new practice regimen. Her efforts paid off in the meets. She participated in the long jump, triple jump, and high jump as a freshman. Sinkler finished fourth in the long jump (19’9.75″) and fifth in the triple jump (39’3″) at her first ACC Indoor Championships.

Sinkler suffered an injury in the 2008 ACC Indoor Championships that plagued her throughout much of the outdoor season. Yet, despite the injury, Sinkler’s accolades continued during her freshman season. She earned USA Junior All-America honors in the long jump and high jump following the outdoor season.

With a year under her belt, Sinkler’s hard work and determination have enabled her to have such an impressive season thus far in 2009. Sinkler credits her new coach, Lawrence Johnson, for pushing her to be better than she was last season.

“I like him (Lawrence Johnson) a lot,” said Sinkler. “He keeps me straight and I really need that. He makes sure that I’m intense at practice because every practice counts. Hard work pays off.”

The sky is the limit for Sinkler as she recently completed the indoor season and is ready to move on to outdoor. Her performances as a jumper have already earned her numerous accolades and she’s just a sophomore. As she continues to grow one thing is for sure: further success is in her future.