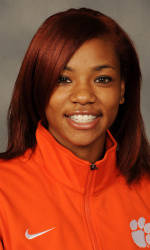 CLEMSON, SC – The Clemson track & field program will split its men’s and women’s teams up into three different meets this weekend – the Tiger Paw Invitational at home, the Tyson Invitational in Fayetteville, AR, and the Husky Classic in Seattle, WA. The Tiger distance groups are headed to Washington, the sprints, hurdles and jumps are in Arkansas, and the remainder of the student-athletes will compete in Clemson. All three meets will be held Friday and Saturday at their respective destinations.

Much of the No. 3 ranked women’s team will be at Arkansas’ Randal Tyson Track Center this weekend. Clemson will not compete in the 60-meter dash, but will have a handful of student-athletes in the 200, including Dezerea Bryant, Stormy Kendrick and Marlena Wesh. Clemson will compete three women in the 60 hurdles, but not auto NCAA qualifiers Bridgette Owens or Brianna Rollins. The Tiger women will also compete in the 400 dash, 4×400 relay, long jump and triple jump in Fayetteville.

From the men’s team, Jameel Abdul-Mateen and C.J. Davidson are scheduled to compete in the jumps as well.

The Husky Classic will play host to numerous distance standouts this weekend, including several from Clemson. On Friday, Kim Ruck and Ty McCormack are entered in the invitational sections of the women’s and men’s 5K, respectively. On Saturday, the Tigers will compete Aaron Ramirez in the men’s 3K and Natalie Anthony and Alyssa Kulik in the women’s 3K.

The Tiger Paw Invitational, held at Clemson’s indoor track facility, will start at 3:30 PM Friday with the running of the men’s 5K. The first field events are also set for 3:30. Clemson’s top competitors in action Friday are Will Robinson in the men’s long jump and Brittney Waller in the 20-pound weight throw. She is coming off a season-best in the event and fouled what would have been a personal best last week at the New Balance Invitational.

Saturday’s events begin at 11:00 AM, with the women’s pole vault and distance medley relay. Clemson vaulters T.J. Christy and Cory Thalheimer look to improve upon their season bests at approximately 2:30 in the men’s shot put. On the track, Clemson freshman Brianna Blanton is one of several entries for the Tigers in the women’s 800-meter run at 12:45 PM.