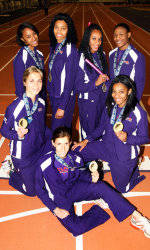 Clemson’s margin of victory was the largest at any ACC women’s indoor track meet since the 1997 season. The Tigers also produced a school record six indoor champions, including five individuals and the mile relay.

April Sinkler took home crowns for the second straight year in the high jump and long jump. Liane Weber won her third pentathlon championship in four years. Kim Ruck dominated the 5K from start to finish, and Brianna Rollins took the gold in the 200m dash.

But the icing on the cake was provided by the 4x400m relay team, which consisted of four first-year freshmen. The lineup of Brittany Pringley, Rollins, Sonni Austin and Jasmine Edgerson won the event for the Tigers, a first since 2004.

Women’s Team Ties for Seventh at NCAA Championships Led by Patricia Mamona’s runner-up finish in the triple jump, Clemson posted its best team showing in women’s track & field at the NCAA Indoor Championships by tying for seventh place. It was the program’s highest finish since the 2001 group was third. It was the third top-10 team finish in Clemson women’s track & field history at the NCAA Indoor Championships. The women’s team tallied 20 points at the meet, tied with Florida State and UTEP for seventh. Oregon (61) won the meet, followed by Tennessee (36) and LSU (35).

Twelve Tigers Earn All-America Distinction When the U.S. Track & Field and Cross Country Coaches Association (USTFCCCA) released the official list of 2010 indoor All-Americans the Monday following the NCAA Championships, Clemson boasted 10 student-athletes that combined for 12 of the honors. A school-record eight different women’s track & field athletes were named All-Americans, including two (Brianna Rollins and April Sinkler) that earned the honor in more than one event. The previous high total for a single season, in terms of Clemson women’s All-Americans, was 2001 when seven Tigers were honored during outdoor season.

Johnson Named ACC, Southeast Region Coach-of-the-Year Clemson’s Director of Track & Field Lawrence Johnson was named ACC Coach-of-the-Year and Southeast Region Coach-of-the-Year by the USTFCCCA for women’s indoor track & field in 2010. Johnson led the Clemson women to their first ACC indoor championship since 1992. He also led the Tigers to a seventh-place finish as a team at the NCAA Championships, just the third top-10 finish in program history. He coached a program-best 10 All-Americans this indoor season alone, including multiple honorees Brianna Rollins and April Sinkler. His student-athletes established nine women’s indoor event school records in 2010 alone. Johnson is the first ACC Coach-of-the-Year for women’s indoor track & field at Clemson since Wayne Coffman earned the accolade in 1996.

Sinkler Honored by USTFCCCA, ACC for Indoor Accomplishments Clemson jumper April Sinkler earned a pair of accolades in 2010 for her accomplishments in the field events. She was named ACC Most Valuable Indoor Field Event Athlete at the conclusion of the 2010 league meet, when she successfully defended her crowns in both the high jump and long jump. A week later, she was named Southeast Region Indoor Field Event Athlete-of-the-Year for women’s track & field.

Sinkler competed at the NCAA Championships in three events and earned All-America honors in two of them. She finished seventh in the triple jump at the national meet with a personal best 43’7.25″. She also won the honor in the long jump as one of the top eight American finishers. Sinkler broke the Clemson records for both the high jump (6’0.75″) and long jump (21’6″) at the ACC Indoor Championships in February. In fact, she was the first Clemson female to clear the six-foot barrier in the high jump.

Rollins Named ACC Indoor Freshman-of-the-Year Clemson rookie Brianna Rollins was named ACC Freshman-of-the-Year for women’s indoor track & field, as determined by a vote of the league’s 12 head coaches. Rollins, the first female Freshman-of-the-Year in the ACC for Clemson since Liane Weber in 2007, earned All-America status in both the 60 hurdles and with the 4x400m relay. She led the relay team to a fifth-place finish with a Clemson record time of 3:33.93. Rollins also ran second leg for the ACC Champion relay team, and brought home an individual conference title in the 200 meter dash as well. She established the Clemson record for the women’s 60 hurdles (8.17) and posted school freshman records in the 200, 400 and 60 hurdles.

Wilson Named Southeast Region Assistant Coach-of-the-YearMario Wilson earned Women’s Assistant Coach-of-the-Year honors, the first coaching accolade of his young career bestowed by the coaches association. Wilson assists with the instruction of the team’s jumpers and multi-event athletes. Three of the athletes he coaches – Patricia Mamona, April Sinkler and Liane Weber – earned bids to the NCAA Indoor Championships. Two of them, Sinkler and Weber, won individual ACC Championships at the meet in Blacksburg. Wilson also coaches the pole vault. Under his tutelage, Caroline Kennedy and Amy Morrison now rank atop the school’s indoor performance list for the event.

Freshman Relay Team Wins ACC, Breaks School Record at Nationals For the first time in school history, a group of four freshmen combined to claim an ACC Championship in a relay when the women’s team won the 4×400 meter final on Feb. 27 in Blacksburg.

The team of Brittany Pringley, Brianna Rollins, Sonni Austin and Jasmine Edgerson produced a season-best, NCAA provisional time of 3:35.76 and ran away with the first-place trophy. It was Clemson’s first indoor relay victory since the 2004 season.

The victory was certainly not a fluke for the Tigers, as the NCAA meet would prove. The Tigers competed in the first of three heats, but overwhelmed their competition and posted the fifth-best time at the Tyson Track in Arkansas. Their time was a school record, 3:33.93. It marked the first All-America performance for the Clemson women in the mile relay since 2004.

Moss not only broke the record, he nearly auto qualified for the NCAA Championships in the process. He produced a two-day total of 5,653 points, just 25 shy of the automatic standard, to win the heptathlon at the Clemson Games.

He did not disappoint when it came time to compete at the ACC Championships. The Sumter, SC product was runner-up with another school record, this time hitting the automatic total with 5,699 points. He earned a ticket to nationals for the first time in his indoor track & field career.

At the NCAA meet, Moss came through with an All-America performance. He finished eighth in the heptathlon, scoring a point for the Tiger men’s team. He was Clemson’s first All-American in the heptathlon since Koontz in 2007. He was able to get into scoring position after running a personal best 2:39.68 in the final event of the competition, the 1000 meters.

Weber Wins Third ACC Pentathlon Crown, Finishes Fifth at NCAAs Clemson’s Liane Weber has set a standard within ACC women’s track & field that will be tough to follow. When she won the pentathlon on Feb. 25, she became the first athlete to win the competition three times over the course of a career.

Weber did so in impressive fashion, tallying a point value of 4,262. It was her second straight automatic NCAA qualifying total and it also broke her conference and school record as well.

Weber could not have asked for a better start, as she ran a personal best 8.57 in the 60m hurdles. She then followed with another PR in the high jump at 5’8″ and in the shot put with a throw of 40’5″. Weber concluded strong with solid marks in the long jump and 800 meters.

She competed in the pentathlon at NCAA nationals, earning her second consecutive indoor All-America honor. Weber placed fifth, one spot higher than she did during the 2009 meet.

Mamona Breaks Through at NCAA Nationals Entering the 2010 NCAA Championships, Clemson athlete Gisele Oliveira’s school record. Mamona hit a leap of 45’5.25″ in the finals, finishing second in the event and earning her first career All-America accolade as a Clemson Tiger.

Ruck Restores Distance Tradition at Clemson Over the last year and a half, there has been no bigger development than that of sophomore distance runner Kim Ruck. After walking on to the Tiger cross country team in the fall of 2008, she has steadily moved up the ranks in Clemson history in a multitude of distance events.

What’s even more impressive is that Ruck did not compete in cross country or track & field at Eastside High School. She was all-state in soccer after leading the 2007 team to a state championship.

She enjoyed a banner season on the indoor track circuit in 2010. It began when she went under five minutes for the mile, the first female at Clemson to do that since Perry Fields in 2001. She ran a strong provisional NCAA qualifying time in the 3K at Virginia Tech at 9:30.21, followed by a provisional time in a 5K win at the Tyson Invitational a few weeks later.

Her name started to become household within the distance community on Feb. 26 when she broke her own school record in the 5000 meters and won the ACC Championship in the event. She was Clemson’s first indoor distance champion for the women’s team since Mareike Ressing won the 3K in 1993.

Ruck followed suit and delivered her best performance for the final meet of the 2010 indoor season, the NCAA Championships. She placed seventh against a great field in the 5K, again breaking the school record. This time, Ruck crossed the finish line in 16:01.24 to become the school’s first female indoor All-American since Ressing in 1994.

Adams’ Return to Track Comes Full Circle Clemson two-sport athlete Spencer Adams, a safety for the Tiger football team, earned a spot at the NCAA Indoor Championships by virtue of improving his personal best by a mere one-hundredth of a second at the Virginia Tech Qualifier the weekend prior to the national meet. His time of 7.83 was enough to land Adams a spot in the 60 hurdle prelims. Once at the national meet, he clocked a personal best 7.80 (sixth-best in Clemson history) to qualify for the finals of the event. In the final, he was performing well before clipping the fifth hurdle in the race. He stretched across the finish line in wild fashion, finishing eighth and landing his first-ever All-America certificate.

It was quite a return for Adams, considering he sat out the 2009 collegiate track season after suffering a torn ACL on the gridiron in the fall of 2008 as a first-year freshman. Adams was the only first-year performer to qualify for the finals at the NCAA meet. He was Clemson’s first male All-American in the hurdles since Roy Cheney was ninth at the 2004 meet in the 60 hurdles.

Berg Puts Injuries in the Past If Kim Ruck’s emergence as a national distance runner was the program’s top storyline in 2010, Zach Berg’s ability to overcome past injuries and obstacles has to be near the top as well.

Berg, the oft-injured thrower from Tega Cay, SC, not only bounced back, but he also re-wrote the school record in the 35-pound weight throw. He did so with a throw of 66’5″ at the Clemson Games in January, then followed with an even greater mark (66’11.5″) a few weeks later at the Virginia Tech Elite Meet. Berg added a second career All-ACC honor in the weight throw in February when he hit a mark of 66’9.25″ and placed third at the conference meet. Berg, who missed qualifying for nationals by a matter of inches, was arguably the nation’s most consistent thrower with the 35-pound weight.