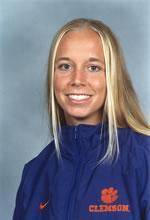 CLEMSON, SC – The Clemson track and field teams will host the 2004 Orange & Purple Classic on Saturday at the Rock Norman Track and Field Complex. 38 collegiate teams will compete in this year’s meet. Saturday’s event will also feature the finals of the Tiger Relays for third, fourth and fifth-grade elementary school students.

The Orange & Purple Classic is slated to begin at 11:15 AM with the men’s hammer throw and women’s pole vault and javelin throw, and the running events are scheduled to start at 1:00 PM with the men’s 3000m steeplechase. The final running event of the day will be the women’s 4x400m relay at 6:30 PM. In the elementary Tiger Relays, the third-grade championships will feature teams from Clemson, Fair Oak, James M. Brown, Walhalla and Westminster Elementary schools. The fourth-grade championship race will include teams from Ben Hagood, Clemson, Code, Keowee and Westminster Elementary schools. Ben Hagood, Central, Clemson, Fair Oak and Walhalla Elementary teams will vie for the fifth-grade championship on Saturday.

In the field events for the Clemson women, Beth Jordan, Kristin Thompson and Sara Young will compete in the pole vault, and Felicia Hawthorne and Gisele Oliveira are entered in the long and triple jump competitions. Allison Bradshaw, Della Clark and Krystal Woods will represent the Lady Tigers in the hammer throw, and Woods will also compete in the discus throw while Bradshaw and Clark are entered in the shot put. Katie Pickett will contest the javelin.

Airese Currie, Tye Hill, Robert Ibeh, George Kitchens and Ronald Richards will compete in the 100m dash for the Tigers, and nine Tigers are entered in the 200m dash, including Marquis Andrews, Currie, Griffin, Hill, Ibeh, Lydell Perry and Richards. Acker, Andrews, Warren Eure and Roy Cheney, Brent Hobbs and Perry will compete in the 110m hurdles, and Michael Bolling, Cheney, Rashad Gardner and Scott Kautz will represent the Tigers in the 400m hurdles.

Field event Tigers will include Brent Hobbs, Kitchens and McDaniel will represent Clemson in the long jump. Derek Gilson and Danny Alge is the lone Tiger in the hammer throw.

Admission is free to the public, and complete results from the Orange & Purple Classic will be available at www.clemsontigers.com following the conclusion of the meet.