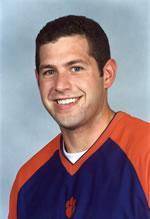 CLEMSON, SC – The Clemson track and field teams will host the 2004 North Carolina vs. South Carolina All-Star Meet on Saturday at the Rock Norman Track and Field Complex. Nine teams will compete in this year’s meet, including Brevard, Charleston Southern, Charlotte, Clemson, Coastal Carolina, Gardner-Webb, Mars Hill, Morris and UNC Wilmington. Saturday’s event will also feature the return of the Tiger Relays for third, fourth and fifth-grade elementary school students. The meet will begin at 11:15 AM with the men’s hammer throw and women’s pole vault and javelin throw, and the running events are slated to start at 1:35 PM with the men’s 4x100m relay. The final running event of the day will be the women’s 4x400m relay at 5:05 PM.

In action on Saturday for the Lady Tigers will be Marquita Dortch and Jelyn Quick in the 100m and 200m dashes, and both Dortch and Quick will also compete in the 110m hurdles. The Lady Tigers’ 4x100m relay team of Silja Ulfarsdottir, Christina Smith, Randi Hinton and Jessica Cousins will compete in that event. Felicia Hawthorne and Becky Adnot, Beth Jordan, Kristin Thompson and Sara Young will compete in the pole vault. The long jump field will include Clemson’s Gisele Oliveira , and both will also compete in the triple jump. Allison Bradshaw and Della Clark will double in the shot put and hammer throw for the Lady Tigers, while Krystal Woods competes in the discus and hammer throws. Christina Moore and Katie Pickett will represent Clemson in the javelin.