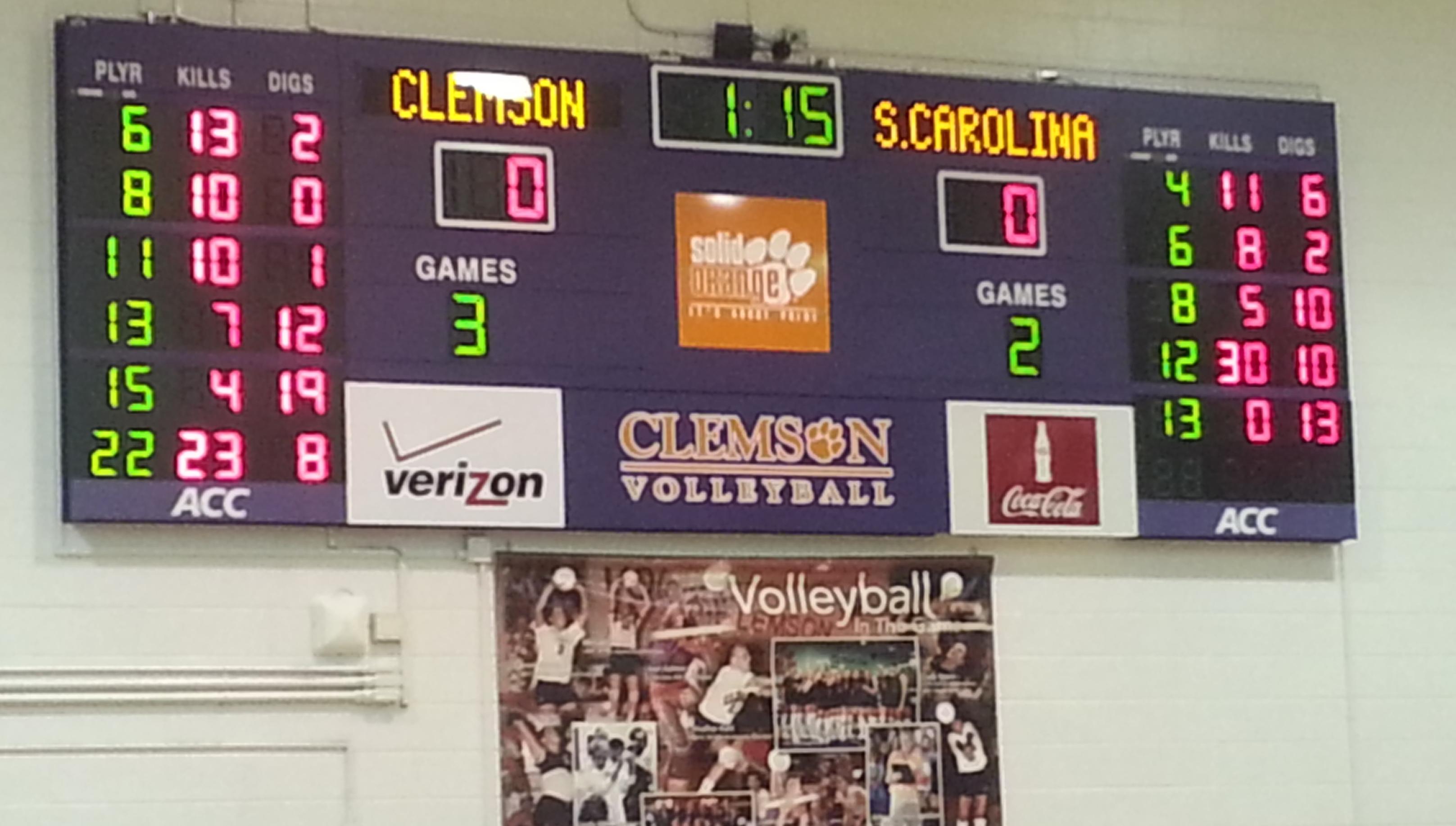 CLEMSON, SC – The Clemson volleyball team earned a thrilling five-set win (22-25, 25-20, 25-21, 20-25, 15-9) over in-state rival South Carolina on Friday night in front of a standing-room-only crowd in Jervey Gym in the Big Orange Bash. Clemson (2-2) handed the Gamecocks (3-1) their first loss of the season and tallied season-highs in nearly every category.   “It’s always great to get a win and a win against South Carolina is huge,” said Head Coach Jolene Hoover. “I have to give South Carolina a heck of a lot of credit.  They’re a really good team, there were some long rallies and they battled.  It was a well-fought match.” The Tigers held on in an intense match that lasted more than two and a half hours. The fan energy stayed high as the Solid Orange crowd of 1,840 willed the Tigers to victory.  “The atmosphere was awesome.  We talked about it before the match that we were going to have 2000 screaming people out here to support us, so let them help us and use that momentum,” said Hoover.  The Tigers did just that, fighting back after dropping the first set to the Gamecocks. After being unable to shut the door in the fourth set, Clemson controlled the fifth set throughout en route to the win.  Mo Simmons paced the Tigers with 23 kills in a career-high 69 attacks, with only five errors, and also added eight digs. Freshman Leah Perri was sensational, tallying 13 kills in 26 swings, including eight straight kills without an error to finish the match. Middles Beta Dumancic and Karis Watson came up huge as well, tallying ten kills apiece and tallying nine and four blocks, respectively.  Setter Hannah Brenner played one of the best all-around matches of her career, totaling 56 assists, a team-high 19 digs, five blocks, four aces, and four kills.  Clemson defense was stingy, allowing just one service ace on 101 South Carolina serves, while totaling eight aces of their own. For the match, the Tigers were able to side out on 66 percent of South Carolina’s serves, including 25-34 in the final two sets.  Libero Kristin Faust (18 digs, 7 assists) and defensive specialist Niki Collier (14 digs) combined to go a perfect 45-for-45 in serve receive, while Simmons was also 23-of-23. The Tigers also tallied 14.0 team blocks, led by nine from Dumancic. Simpsonville-native Sydney Moseley was also impressive, tallying seven kills, 12 digs, a 22-for-23 mark in serve receive, and an ace, playing the entire match.  In the earlier Bash match, Winthrop topped Furman in five sets, 21-25, 21-25, 25-20, 25-17, 15-9. Clemson is back in action on Saturday morning at 10:00 am against Winthrop, and will play Furman at 6:00 pm.