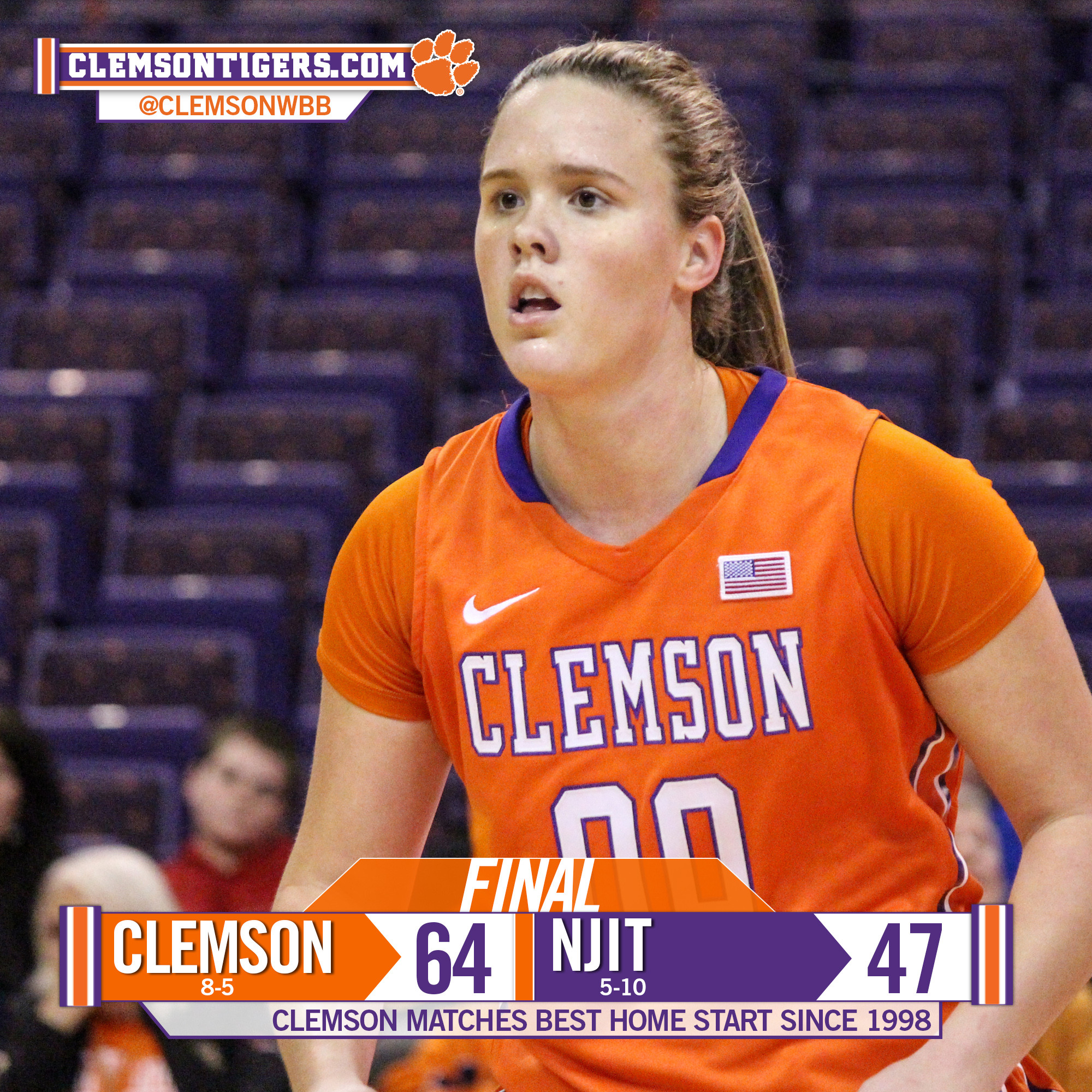 CLEMSON, S.C. – The women’s basketball team took down NJIT, 64-47, to start 8-0 in Littlejohn Coliseum for the first time since 1998. The Tigers (8-5) have won five in a row overall heading into conference play, which opens Friday night at 7 p.m. against Virginia Tech.

Clemson jumped out to an 11-1 lead and never trailed after MaKayla Johnson (eight points) hit a layup from New Jersey-native Cha’nelle Perry just 38 seconds into the game. Perry and Johnson connected again on the next possession in what would dictate the style of the game. Clemson pressed ahead, taking a 17-3 lead, before NJIt closed it to five on a 9-0 run.

However, Davenport and Dixon scored seven straight to again push the lead out to 12, and the Tigers led, 33-19 at the half.

In the second, NJIT threatened with a 10-0 run to pull within six at 39-33, but Ivy Atkism (six points, five rebounds) stopped the bleeding with a pair of layups, spurring a 12-3 run that gave the Tigers a double-digit lead for good.

The Tigers had just 11 turnovers and held the Highlanders to 47 points, an opponent season low. Clemson has had a positive assist-to-turnover ratio for four straight games, all victories.

“I am really excited with this young team. I told them, after this game, we’re not calling them young anymore. For these guys, it was really good. No game is ever guaranteed. And you’ve seen, we’re playing up and down, and we’ll get a lead and get comfortable, and we’ve let some teams come back. But, what that does is shown us to keep playing and to figure out. That’s what I do, sometimes I sit down and I let them figure it out. They see that I’m not up, not yelling, and not calling timeout, so they know, it’s time to get it going. When we turn it up a notch defensively, our offense flows. For this young team to be able to be 8-0 at home and being limited in size in the post, I’m very proud of them.

At the Buzzer: Kelly Gramlich’s Take

The Clemson Lady Tigers got off to a quick start offensively in the first half against NJIT and never looked back. Clemson shot 45% from the field and 88% from the line in the contest while holding the Highlanders to only 47 points and forcing NJIT into 20 turnovers. The Lady Tigers adequately took advantage of the 20 Highlander turnovers, scoring 25 points off of those turnovers.

Offensively, Clemson’s total team effort was the key to the victory. Nine different Lady Tigers scored in the contest led by Shelbie Davenport (15 pts), Tiffany Lewis (12 pts) and Nikki Dixon (11pts). The 64-47 victory over NJIT provides Clemson with a perfect post-holidays tune up before they begin Atlantic Coast Conference play Friday, January 2nd vs. Virginia Tech. The ACC is the toughest league in the country and I believe the Lady Tigers are poised to do some damage in the conference this year.