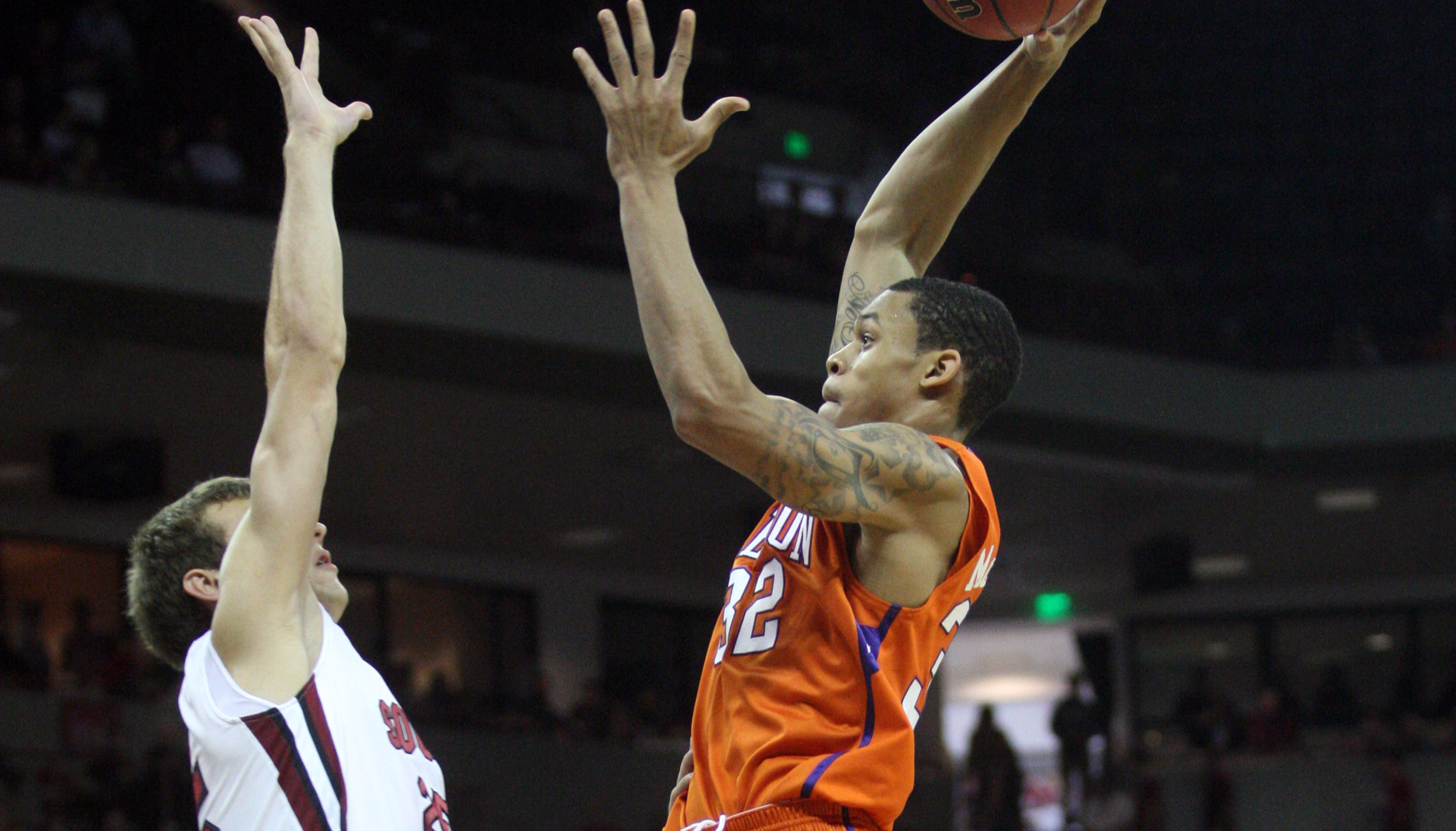 COLUMBIA, SC – Clemson improved to 4-1 all-time in Colonial Life Arena as the Tigers locked in defensively in a 64-55 win over South Carolina on Sunday. Clemson moved to 5-2 with the win, while South Carolina fell to 5-3 with the loss. The win was Clemson’s first since 2009-10 over South Carolina, and Head Coach Brad Brownell‘s first against the Gamecocks as well.Three players reached double figures for Brownell’s team, led by K.J. McDaniels with 16. He made all seven of his free throw attempts in the second half and added seven rebounds and five blocked shots. Devin Booker added 13 points and eight rebounds, capping a good week for the 6-foot-8 senior. He added three steals and a pair of blocks. Rod Hall scored 15 for the Tigers and made 9-of-12 at the free throw line to salt the game away late.South Carolina, who was led by Brenton Williams’ 16 points, shot just 34.6 percent for the game and committed 19 turnovers. The Tigers had 10 steals and eight blocked shots in the win and helped limit USC to 27 percent shooting from three-point range as well.After South Carolina tied the game 3-3, Clemson enjoyed an 11-0 run over the next four minutes punctuated by a Devin Booker steal and slam. The Gamecocks answered on the other end with a Brenton Williams three to cut the lead to 14-6 at the under-12 timeout. McDaniels again stretched the lead to 11, but two straight baskets by USC cut the lead to 17-10.Clemson took its largest lead at 23-11 on a three-pointer by Columbia native Jordan Roper, but USC answered with a 7-0 run that was capped by a layup inside from Lakeem Jackson. The Gamecocks whittled the lead to just one at the break, 28-27, after a slew of miscues on Clemson’s part to end the half. The Tigers had more turnovers at half than they averaged per game entering Sunday’s tilt.The momentum continued out of intermission, as Carolina scored on baskets by Williams and Jackson. Clemson was able to get a runout on a Damarcus Harrison layup to make it 31-30 at the 16:49 mark. McDaniels sank four straight free throws, before Booker hit a layup and Roper converted a steal and slam on the other end to give the Tigers a 38-33 edge with 13:53 left.A fastbreak layup and free throw by McDaniels made it 41-33 in favor of Clemson, but Mindaugas Kacinas hit a three on the other end to cut the lead to five. The lead grew to 49-37 after Booker scored six straight points, but LaShay Page picked an opportunistic time for his first points of the night on a long three to cut it to 49-40 at the under-8 timeout.The lead was cut to 51-47 on a layup inside by Bruce Ellington. Clemson faced a zone on the other end, and toward the end of the shot clock, Greenwood native Harrison buried a three to make it a seven-point game at the final timeout. The Gamecocks turned the ball over on back-to-back possessions down eight with less than three minutes to play, and Clemson converted its free throws down the stretch to pull away.The Tigers return to action on Saturday, Dec. 8 to take on a top-10 Arizona team. Tipoff is scheduled for 8:00 PM from Littlejohn Coliseum.