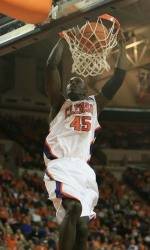 Clemson, S.C. (AP) – Sophomore reserve Jerai Grant had a career-high 14 points and No. 20 Clemson improved to 14-0 for the second time in three years with a 79-66 victory over East Carolina on Saturday.

Grant is the latest in his family to excel for the Tigers. His father is Harvey Grant, who played two seasons at Clemson before transferring to Oklahoma, and his uncle is Horace Grant, the former Chicago Bull who stuck around Littlejohn Coliseum and helped the Tigers to a 17-0 start in 1986-87.

Jerai’s team moved a step closer to that mark against the Pirates (8-5), who have lost four straight and couldn’t keep up with Clemson’s depth.

That included Grant, a 6-foot-8 forward who made all four of his field goal attempts and was 6-of-7 from the foul line. Grant also grabbed six rebounds – five on the offensive glass – and gave Clemson an inside force when starting forwards Trevor Booker and Raymond Sykes were getting outplayed underneath.

The Pirates had cut a 16-point first-half lead down to 36-31 right before the half. The score was 51-44 after Sam Hinnant’s bucket when Grant helped turn the momentum back to the Tigers.

Grant made three free throws, then put back K.C. Rivers’ miss. When Grant added another inside bucket a minute later, Clemson was up 63-48.

Rivers led the Tigers with 18 points. Booker had 13 points and nine rebounds.

Clemson will certainly need Grant’s contributions if it hopes to equal its best-ever start, set by his uncle’s team and matched two years ago.

The Tigers face Alabama on Tuesday, then jump back into the Atlantic Coast Conference against North Carolina State next Saturday.

The Pirates went more than six minutes without scoring to fall behind 26-13. Then East Carolina found its range and began to reel in the Tigers. James Legan and Sam Hinnant had two 3-pointers apiece during a 15-4 run. When Legan struck for a long-distance shot to close the charge, East Carolina was down only five.

The Pirates had opened the season 8-1, their best start in five years. But they came in on a three-game losing streak, including defeats to ACC opponents in North Carolina State and Wake Forest.

The Tigers figured to be an equally stern test. But Clemson, which entered this one off a satisfying victory over rival South Carolina on Tuesday night, seemed to be looking ahead to its Alabama game next week and then a return to conference play.

The Tigers missed five shots in one possession and their starters had trouble getting things going.

Point guard Demontez Stitt was 0-for-5 the first 20 minutes. Twin inside powers Sykes and Booker were outrebounded 8-7 by East Carolina’s duo of Chad Wynn and Darius Morrow.

Wynn finished with eight points and 11 rebounds. Brock Young had 11 points and 10 assists for the Pirates.