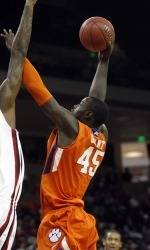 But Zavier Anderson, a 5-foot-9 walk-on, came off the Clemson bench to thwart a Pirates’ rally as the Tigers held on for a 71-59 victory Wednesday night.

In a span of less than a minute, Anderson grabbed back-to-back offensive rebounds – tipping in the second for a basket – hit two foul shots and found Milton Jennings open for a dunk. The six-point flurry gave the Tigers a 64-53 lead with 4:29 left after the Pirates had closed a 14-point deficit to five.

“We had it right where we wanted it – on the road,” said East Carolina coach Jeff Lebo. “Then a 5-9 guy gets two offensive rebounds and a stick-back, and that kind of deflated us right there.”

Grant had 18 points and blocked a career-high eight shots for the Tigers (10-4), who won their fifth straight game. Jennings had 13 points and Andre Young added 11.

But it was Anderson, a senior who logged only 44 minutes of playing time in his first three seasons, landing the quick knockout blows.

“This is like a dream come true,” said Anderson, who had six points, four rebounds and two steals in 14 minutes.

“That’s why I put him in there,” Clemson coach Brad Brownell said. “I felt our body language on the court was not very good. I thought our enthusiasm and our energy level was kind of low and (Anderson) is certainly one of our energy guys.”

The teams combined for 49 fouls – 29 on East Carolina – and 63 free-throw attempts in a whistle-filled contest that Lebo described as “ugly.” In the second half, both teams were in the double bonus for more than 10 minutes.

“If you had paid to come watch that, they should have given you a refund,” Lebo said. “Unless you want to watch people shoot free throws.”

Clemson enjoyed a 35-28 lead at intermission thanks to a 16-0 run late in the opening half.

Demontez Stitt, who had all 10 of his points in the first half, sparked the streak with a 3-pointer followed by a steal and a pass to Tanner Smith for a layup.

East Carolina led by as many as six points in the opening half, but struggled against Clemson’s tight man-to-man defense as the Tigers pulled ahead.