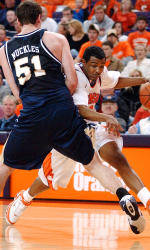 CLEMSON, S.C. (AP) — Cliff Hammonds scored 16 of his 21 points in the second half to lead Clemson to an 80-72 victory over East Tennessee State Friday night.

At one point, Hammonds, who entered the game shooting just 16.7 percent from three-point range, scored 10 straight points midway through the second half to push the Tigers (8-0) to a 17-point lead.

But Clemson’s sloppy play late, which included turnovers on seven straight possessions, enabled the Buccaneers (1-5) to hang within single digits down the stretch.

The Tigers led by 15 early in the second half, but ETSU battled back behind the production of Smith, who scored 10 straight points for the Buccaneers to whittle the lead down to six at 54-48 with 11:21 left to play.

Smith also scored 10 straight points in the first half.

Also in the opening half, 20 of Clemson’s 35 field goal attempts were three-pointers, of which it made only four. For the game, the Tigers were 10-of-31 from beyond the arc.