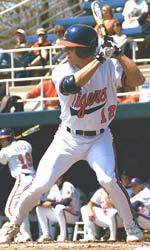 Clemson, SC- Clemson got two home runs from Kyle Frank and defeated College of Charleston by a score of 6-2 Wednesday afternoon. On Head Coach Jack Leggett’s 49th birthday, the Tigers delivered nine hits and gave up only three. With the win, the Tigers improved to 5-3, while the Cougars fell to 7-6 on the season.

Kris Harvey (1-0) , a freshman righthander from Catawba, NC, got his first career start against the Cougars. Harvey, who is the son of former Major League pitcher Bryan Harvey, gave up two hits and one earned run over 4.0 innings. Three pitchers combined for the final five innings, giving up only one hit and no runs.

Clemson opened the scoring in the second inning. Kyle Frank followed that with a single to right field. Catcher Collin Mahoney then brought Triplett home with a sacrifice fly to center to make it 1-0.

College of Charleston answered in the top of the third inning. Lee Allen singled up the middle to start off. Allen advanced to second after Triplett mishandled a ball tossed to him by David Slevin. The error allowed Matt Cheek to reach on a fielder’s choice. Harvey then walked Brett Gardner to load the bases. Lee Curtis then plated Allen with a sacrifice fly to right field. Harvey avoided further damage by getting Brett Spivey to ground out to shortstop with the bases loaded.

The Cougars took the lead in the top of the fourth inning. After Harvey walked Matt Lauderdale, Jay McCown reached on the second error of the game by Triplett. Allen doubled to right field to plate Lauderdale, giving the Cougars a 2-1 lead.

Clemson responded in the bottom of the inning after Kyle Frank hit a two-run homer, his second of the year. The play was set up after Triplett reached second base on a throwing error by Cougar third baseman Jay McCown.

The Tigers added onto the lead in the bottom of the sixth inning. Triplett led off with a single, and advanced to second on a throwing error by Matt Cheek. Frank followed that up with his second home run of the game, giving Clemson a 5-2 lead. The Tigers added another run after Herman Demmink scored on a groundout by Zane Green.

Frank, who is now 8-13 in his career against the Cougars, led the Tigers with a 3-for-4 performance and four runs batted in. It marked the first time all season that a Tiger batter had more than two RBIs in a game. It also was the first multi-homer game of Frank’s career. Frank now has three home runs for the year, just one shy of his total from last season.

Mike Williams (0-1) was credited with the loss for the Cougars. He pitched 2.0 innings, giving up three hits and one earned run.

Clemson will return to action on Thursday at Doug Kingsmore Stadium. The Tigers play host to Chukyo University (Japan) in an exhibition game at 4:00 p.m.