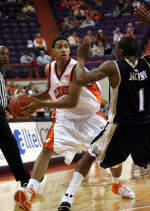 The win marked the first time Clemson (7-0) has won seven games in the month of November.

David Potter joined Mays and Rivers in double figures for Clemson with 10 points off the bench. Clemson scored 20 points off 19 Charleston Southern turnovers. Mays had four of Clemson’s 11 steals.

Charleston Southern (3-3) was led by Giedrius Knysas with a game-high 22 points and 10 rebounds.

The Buccaneers trailed 35-24 with 18:17 to play. But they put together a 10-0 run, highlighted by back-to-back 3-point goals by Chris Moore, to cut the Clemson lead to one point.

But after Knysas scored at the 14:18 mark, Charleston failed to score for almost seven minutes and Clemson went on a 17-0 run to put the game away.