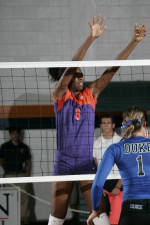 Clemson To Wrap Up First Half of ACC Season This Weekend

CLEMSON, SC – The Clemson volleyball team (13-4, 8-1 ACC) will conclude the first half of the ACC season this weekend, as it will travel to Virginia and Virginia Tech. The Tigers will face the Cavaliers (13-6, 6-4 ACC) at 7:00 pm on Friday night at Memorial Gym in Charlottesville, VA. Clemson will then take on the Hokies (11-8, 5-5 ACC) at the Cassell Coliseum in a Sunday afternoon contest in Blacksburg, VA.

The Tigers have won eight straight matches and have swept their last seven opponents for a 21-game winning streak. Most recently, Clemson defeated Georgia Tech on Tuesday night. The Tigers also posted their second consecutive ACC-weekend sweep with 3-0 victories over NC State and North Carolina on Oct. 13-14.

Clemson’s sophomore standouts remain atop the ACC in respective categories, as of Oct. 17. Danielle Hepburn’s .395 hitting percentage leads the conference, while Jeannette Abbott is averaging a league-best 4.40 kills per game. Hepburn was also ranked #7 in the nation last week with a 1.70 blocks per game average through Oct. 15 matches. She improved the figure to 1.72 with six total blocks against Georgia Tech on Tuesday night, a figure that put her over the century mark for the season. The sophomore from Miami, FL has posted 17 solo blocks with 86 block assists. Abbott has tallied 263 kills to lead the Tigers. Freshman Kesley Murphy has a team-best 482 set assists, while fellow rookie Didem Ege leads the Tigers with 271 defensive saves.

Scouting the Cavaliers The Virginia volleyball team owns a 13-6 overall record with a 6-4 ledger against conference foes this season. After falling in their ACC opener, the Cavaliers ran off five straight victories. They have since dropped three of four matches in league play.

Katie Oaks leads the ACC with a 1.83 blocks per game average; she has tallied 119 in Virginia’s 65 games played. Oaks also boasts a team-best 221 kills. Setter Emily Kirkwood has tallied 752 assists in 2006 while Beth Shelton leads the squad with 220 digs.

As a team, the Cavaliers have recorded 1,012 kills compared to just 953 by their opposition. They are also averaging 3.08 blocks per game with 146 service aces.

Clemson vs. Virginia, The Series Clemson leads the all-time series against the Cavaliers by a 30-12 margin, which includes a 16-4 record in matches played on the Tigers’ home court. Virginia won both meetings during the 2005 season, defeating Clemson, 3-2, on Oct. 21 at Jervey Gym and winning 3-1 on Nov. 23 in Charlottesville, VA. The Tigers’ most recent victory over the Cavaliers was a 3-1 decision in 2004. Virginia head coach Melissa Aldrich Shelton is a former Clemson assistant coach.

Scouting the Hokies Virginia Tech enters the weekend with an 11-8 overall record and a 5-5 mark when facing an ACC opponent. The Hokies will play host to Georgia Tech on Friday night before taking on the Tigers in a Sunday afternoon match-up.

Taylor Parrish leads Virginia Tech with 259 kills this season for a 3.60 kills per game average. Allie Kupec owns a team-best 1.23 blocks per game figure, posting 81 total blocks in 66 games played. Defensively, the Hokies are led by Amanda Cloyd who has 360 defensive saves, while setter Michelle Lang has totaled 819 assists in 2006.

Overall, Virginia Tech is averaging 14.36 kills per game with a 2.62 blocks per game average.

Clemson vs. Virginia Tech, The Series Virginia Tech and Clemson have met just nine times since the series began in the 1980 season. The Tigers hold a slight 5-4 advantage all-time, but the Hokies claimed both meetings last season. They won a 3-0 decision on Oct. 22 in Clemson, SC and then defeated the Tigers, 3-2, in the final regular season match of the year on Nov. 25. Clemson’s last victory over Virginia Tech was during the 2004 season.