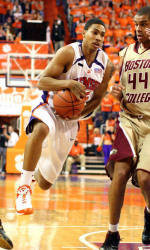 Clemson to Travel to Charlottesville to Face Virginia Thursday Night

 Cliff Hammonds needs two points at Virginia to become the fifth player in ACC history to record at least 1300 points, 400 rebounds, 400 assists and 200 steals in a career.

 Thursday’s game is the first of six in an eight-game period for the Tigers on the road.

 Trevor Booker suffered a sprained ankle in the first six minutes of the Miami game on Jan. 27. But he started against Boston College and had 10 points and seven rebounds, including six off the offensive boards.

 David Potter had a career high tying 11 points in the win over Boston College on Saturday night. It was his first double figure scoring game since December 5 when he had 11 at East Carolina.

 Clemson won points off turnovers 30-9, points in the paint 44-28 and second chance points 25-10, in its victory over Boston College.

 Clemson senior Sam Perry made his first start of the season in the win over Boston College and likely will continue in that role against Virginia. He had five points two rebounds and two steals in the victory.

 Clemson is shooting just 63.5 percent from the foul line this year, but has made 24 of 30 free throws over the last two games, 80 percent.

 Clemson has five players averaging in double figures so far this year. Only two Clemson teams in history have finished a season with five double figures scorers, the 1969-70 team and the 2006-07 team. Five different players have led Clemson in scoring at least three times this season.

 Two of the top three active career scorers will play head to head on Thursday. Virginia’s Sean Singletary has 1800 points for first among ACC players, while Clemson’s Cliff Hammonds is third with 1298. Singletary is first in career assists wtih 510, while Hammonds is second with 421.