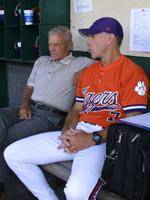 Clemson (13-3), ranked as high as #14 and winners of 10 games in a row, will play host to Maine in a three-game series at Doug Kingsmore Stadium beginning Thursday at 7:15 PM. Game two Friday will also begin at 7:15 PM, while the series finale will be Saturday at 2:00 PM. All three games will be broadcast live on the radio by WCCP (104.9 FM) out of Clemson and can be heard live via the internet at www.clemsontigers.com. Live stats will also be available for all three games on Clemson’s website.

Clemson holds an 11-0 record all-time against the Black Bears dating back to 1991. The two teams most recently met last season in a three-game series, where Clemson swept Maine by a combined score of 29-3. In 1998, the two teams also met in a three-game series at Doug Kingsmore Stadium, another sweep for the Tigers. In the final game of that series, Leggett earned his 600th career win against his alma mater. He has 824 career wins entering the Maine series. Leggett lettered four times at Maine (1973-76) in baseball and three times in football (1974-76). He even kicked a 52-yard field goal in his football days at Maine, a school record to this day. Ten of the 11 meetings have been at Clemson. The first meeting in the 1991 NCAA Northeast Regional championship game resulted in a 13-5 Tiger win at Orono, ME and sent Clemson to the College World Series.

Kyle Frank leads all Tigers in last season’s games against the Black Bears. The Wolfeboro, NH native was 4-for-10 in three starts against Maine, while Jeff Hourigan, a Beacon Falls, CT native, was 3-for-9 with a homer and two RBIs in three starts. Michael Johnson also hit two homers and drove in six runs in three games last season. Leggett is 10-0 against his alma mater as Clemson’s skipper, but was only 2-13 at Vermont and 1-4 at Western Carolina, meaning he is 13-17 against Maine in his head coaching career.

Maine will start three junior righthanders against the Tigers, led off by Mike MacDonald (1-1, 2.57 ERA). In his two starts, he has allowed just eight hits and one walk while striking out 16 in 14.0 innings pitched. MacDonald went 6.0 innings against Clemson last year and allowed nine hits and three earned runs (also suffered the loss). Ryan Harris (1-1, 4.80 ERA) will start game two, while Mike Collar (1-1, 2.40 ERA) will start game three. Harris pitched 3.2 innings in relief against Clemson last year, allowing three hits, five runs, and four walks in the outing. Collar suffered the loss in the opening game of the series against Clemson last year. He went 6.0 innings, allowing seven hits and six runs while striking out five. Two of those strikeouts were against 2002 National Player-of-the-Year Khalil Greene. Collar has struck out 16 and walked just three this season.

Sophomore righthander Jeff Hahn (2-2, 4.86 ERA), who has not pitched since his win in a starting role against Old Dominion on March 9, will take to the mound in game one Thursday. Sophomore lefthander Tyler Lumsden (4-0, 0.64 ERA) will start game two. Lumsden has allowed just 19 hits, two earned runs, and four walks while striking out 29 in 28.1 innings pitched over four starts this year. Freshman righty Jason Berken (2-0, 0.64 ERA) will start game three. Berken has yet to allow an extra base hit in 14.0 innings pitched this season. Clemson has a 2.89 team ERA and already has five team shutouts. The Clemson record in that category is 11 (1977).

Maine (9-3), who is picked to finish first in the America East Conference coaches’ poll, has yet to play a home game and has been on an extended road trip. The Black Bears went 5-1 against Long Island, Iowa, and Fordham at a tournament at Daytona Beach, FL from March 13-18. They do not play their first home game until April 18, their 32nd game of the season. They are hitting .288 and averaging 8.3 runs per game. Aaron Izaryk leads the team with a .390 batting average, while Jesse Carlton is hitting .357 with three homers and 11 RBIs. Alain Picard leads the team with 17 RBIs as well. The team also sports an outstanding .988 fielding percentage, committing just five errors in 12 games.

Clemson is coming off a wet and rainy trip to Georgia Southern and Charleston, SC in which it played three of four scheduled games. The Tigers most recently defeated College of Charleston 7-6 on Russell Triplett’s two-out hit on an 0-2 count and down a run in the ninth inning. The team’s batting average stands at .296, led by Triplett and Garrick Evans’ .333 average. Brad McCann has been the Tigers’ hottest hitter, going 16-for-32 with 16 RBIs during his eight-game hitting streak. Ryan Hub, who was not even on Clemson’s postseason roster a season ago, is hitting .469 with two homers and 11 RBIs in just 32 at bats.