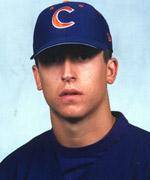 Clemson to Play Host to Wofford Monday at 7:15 PM

Clemson (16-3), winners of 13 games in a row, will play host to Wofford (4-17) Monday at 7:15 PM at Doug Kingsmore Stadium. There will be no radio broadcast of the game; however, live stats will be available on Clemson’s official athletic website at www.clemsontigers.com.

Wofford’s starter on the mound has yet to be announced. Clemson will send out freshman righthander Jason Berken (2-0, 0.64 ERA). He has allowed just one run and seven hits in 14.0 innings pitched over five outings and two starts this year. Berken has not pitched since his start on the mound against Georgia Southern early last week.

Wofford is coming off a three-game series against Davidson in which the Terriers won two games. They are hitting .270 as a team and have a 9.16 ERA. Jesse Cole leads the Terriers at the plate with a .319 batting average, while Brian Casey is hitting .311. Wofford is 1-5 in away games in 2003.

Clemson is coming off a three-game sweep of Maine and has won 13 games in a row, tied for the eighth-longest streak in school history. Zane Green leads the team with a .368 batting average, while Brad McCann is hitting .319 with two homers and a team-high 23 RBIs. Ryan Hub is also riding a nine-game hitting streak. The Tigers are hitting .304 as a team and are 12-0 at home this season. They also sport a 3.07 team ERA.