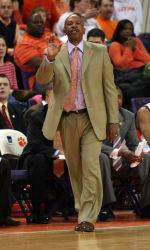 Clemson to Play Host to Purdue in ACC vs. Big Ten Challenge

Clemson, SC – Clemson will play host to Purdue in the ACC vs. Big Ten Challenge at Littlejohn Coliseum on Tuesday, November 27, 2007. The game will be nationally televised by ESPN 2 and will have a 9:30 PM tip-off. It will be the last of five games on the Challenge schedule on November 27. The event runs from November 26-28 at various ACC and Big Ten school sites.

“We are always excited to play in the ACC vs. Big Ten Challenge,” said Clemson Head Coach Oliver Purnell’s. “It is even more exciting to play host to the event. It will be a game I know our fans and our team will look forward to.

“Purdue has been an outstanding program for many years. They were an NCAA Tournament team last year and certainly will be among the top teams in the Big Ten next season.”

Purdue finished the 2006-07 season with a 22-12 record overall and a 9-7 mark in the Big Ten. Matt Painter’s team defeated Virginia in the ACC vs. Big Ten Challenge last season, 61-59. They advanced to the second round of the NCAA tournament with a victory over Arizona before being eliminated by eventual national champion Florida, 74-67. Purdue will return three starters for the 2007-08 season.

Clemson will return four starters next year, all of whom averaged in double figures. The Tigers finished the 2006-07 season with a 25-11 record. Oliver Purnell’s team tied a school record for victories last year and advanced to the championship game of the NIT. K.C. Rivers, Clemson’s leading scorer last year as a sophomore, is the top returning scorer with a 14.0 average. The rising junior averaged 19.0 points per game in the five NIT games and was named to the All-NIT team. Other double figure returning scorers for the Tigers in 2007-08 are James Mays, Cliff Hammonds and Trevor Booker.