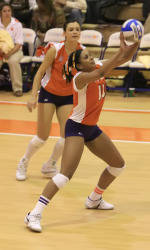 Clemson, SC — Clemson will play host to the NCAA Women’s volleyball championships December 5-6, at the Jervey Gym. The Tigers will meet the University of Tennessee in the first round on Friday at 7:30pm. Furman will meet Utah, the number-12 overall seed in the tournament in the other first round contest at Clemson on Friday at 5:00 pm. Utah has a 24-5 record so far this season. The two winners will then meet in the second round with a Sweet 16 bid on the line on Saturday. The winner of the Clemson Regional will advance to the Seattle Regional.

Times for the matches will be announced on Monday afternoon.

Clemson and Tennessee both have the same 22-9 overall records this year. Clemson had a strong 14-6 record in the ACC, including a thrilling five-set victory over Georgia Tech in its last contest of the season. Jolene Hoover’s team lost the first two sets, then came back to win the last three to capture the victory.

Clemson is led by Danielle Hephurn, who has a .397 hitting percentage for the season, a mark that is on pace to break her own school record. She also leads the ACC in kills/set and blocks/set.

This will be Clemson’s second consecutive NCAA Tournament appearance. Last year Clemson defeated Alabama in the first round in four games before losing in the second round to UCLA in four games. Overall, this will be Clemson’s seventh NCAA Tournament appearance. Clemson also played in the event in 1993, 1994, 1997, 1998, 1999 and 2007.

“We are very excited to be selected for the NCAA Tournament,” said Hoover, who has coached Clemson in every NCAA Tournament match in the program’s history. “Tennessee has an outstanding program and that will be a strong challenge for us in the first round. We are also very excited to play host to the tournament for the second consecutive year.”