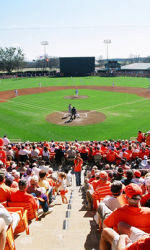 Clemson to Play Host to NCAA Regional For 11th Time

Clemson, SC – Sunday afternoon, Clemson was one of 16 schools selected to play host to an NCAA Regional for the 60th annual Division I Baseball Championship. The action will begin at Clemson’s Kingsmore Stadium on Friday, June 2. Four teams, including Clemson, will play in the Clemson regional with two games each day on Friday, Saturday and Sunday, June 2-4. An “if necessary” game would be played on Monday, June 5.

Clemson was one of four ACC schools chosen to host a regional in the 64-team tournament. The other ACC schools are Georgia Tech, North Carolina and Virginia. Five SEC teams will play host to regionals, including Alabama, Arkansas, Georgia, Mississippi and Kentucky. Big 12 teams Nebraska, Texas and Oklahoma were chosen, while Rice, Cal-Fullerton, Oregon State and Pepperdine were also selected.

Ticket information will be announced on Monday. Call the Clemson ticket office at 1-800-CLEMSON for details.

Clemson has advanced to he Super Regional, or the College World Series through a regional tournament played at Clemson nine times, including each of the last six times Clemson has played host to a regional.

Since the NCAA began seeding teams for the NCAA regionals in 1988, Clemson has a 26-6 record as a number-one seed, including an active victory streak of 17 consecutive games dating to the 1994 season, Jack Leggett’s first year.

This is Clemson’s 20th consecutive year in the NCAA Tournament, the third longest active streak in the nation. Miami (FL) and Florida State, also from the ACC, are the only other schools with longer active streaks. Overall, this will be Clemson’s 32nd appearance in the NCAA Tournament, the sixth most appearances in NCAA history. Texas is the all-time leader as the Longhorns will make their 50th appearance this year.