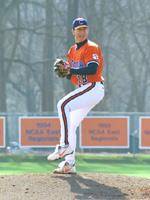 Clemson to Play Host to N.C. State in Baseball This Weekend

Clemson (24-14, 8-4 ACC), ranked as high as #17, will play host to N.C. State (27-13, 9-6 ACC) this weekend in a three-game series at Doug Kingsmore Stadium and another battle for second place in the ACC standings. Game times are 7:15 PM (Friday), 7:00 PM (Saturday), and 2:00 PM (Sunday). All three games will be broadcast live on the radio by the Clemson Tiger Sports Network and can be heard live via the internet at ClemsonTigers.com. Live stats will also be available on Clemson’s website for all three games.

Clemson and N.C. State have met 151 times on the diamond, with the Tigers holding an 88-62-1 lead in the series dating back to the 1921 season. Last year at Kinston, NC, the Wolfpack won the first two games of the series before the Tigers made a late rally to win the final game 12-10. Two years ago, Clemson took two of three games over the Wolfpack at Doug Kingsmore Stadium.

Tiger Head Coach Doug Kingsmore Stadium. Leggett was also 7-18 against the Wolfpack as the head coach at Western Carolina, meaning he is 29-30 all-time against N.C. State.

The Tigers will counter with junior lefty Tyler Lumsden (3-2, 3.89 ERA) Friday. The Roanoke, VA native has started seven games and has pitched 41.2 innings. Lumsden has allowed 42 hits and 18 walks while striking out 45, including 10 in 5.0 innings pitched last Friday at #10 North Carolina.

In game two, N.C. State will start senior righthander Vern Sterry (7-1, 1.57 ERA). The Rowland Heights, CA native has made 10 starts and one relief outing for a total of 68.2 innings pitched. He has allowed just 52 hits (.207 opponents’ batting average) and eight walks while striking out 73.

In game three, N.C. State will start junior righthander Phillip Davidson (4-1, 2.34 ERA). The Warwick, RI native has made six starts and three relief appearances for a total of 34.2 innings pitched. He has allowed just 29 hits (.230 opponents’ batting average) and 10 walks while striking out 30. He has also yet to allow a home run.

Robert Rohrbaugh and Jason Berken will start Saturday and Sunday for the Tigers. The order of their starts has not been determined.

Rohrbaugh (2-2, 2.82 ERA), a sophomore lefty from Littlestown, PA, has made five starts and seven relief appearances. In 38.1 innings pitched, he has allowed 35 hits, eight walks, and no home runs. In his last four starts, all in ACC play, he has pitched a total of 27.1 innings, allowing 25 hits, seven earned runs, and four walks.

Berken (5-1, 2.27 ERA), a sophomore righty from De Pere, WI, has made seven starts, including one Wednesday where he pitched one inning. In 35.2 innings pitched, he has allowed a .167 opponents’ batting average and has 35 strikeouts.

N.C. State, led by eighth-year Head Coach Elliott Avent, enters the series after losing 6-3 at home to East Carolina Wednesday. The Wolfpack sports a 27-13 overall record and 9-6 mark in ACC play, just a half game behind the Tigers’ for second place in the standings. N.C. State is also 8-5 on opponents’ home fields and 9-4 in games decided by two runs or less.

The team is hitting .286, led by Matt Camp’s .376 batting average. N.C. State has hit 19 home runs, led by David Hicks’ seven long balls, 14 doubles, and 37 RBIs. The team is also fielding at a .978 clip. Its fielding percentage entering games this week was third-best in the nation, as no player has committed more than five errors.

The Wolfpack’s strength is the pitching staff, which has a 2.97 ERA and .221 opponents’ batting average. The staff is nearly striking out a batter for every inning pitched and has better than a 3-to-1 strikeout-to-walk ratio. The three scheduled starters have a combined 2.18 ERA along with 176 strikeouts against only 31 walks. Righthander Joey Devine is the team’s closer with eight saves and a .185 opponents’ batting average in 14 relief appearances. He also has struck out 28 against only six walks.

Clemson enters the pivotal series against N.C. State winning 15 of its last 19 games and 11 straight at home, including Wednesday’s 8-7 come-from-behind win over Western Carolina. The Tigers, who are 24-14 overall, are 8-4 in ACC play, good for second place in the standings. Clemson is also 15-5 at home, hitting .327 in the friendly confines. Clemson is also hitting .301 overall, led by Brad McCann’s .394 batting average, nine homers, and 40 RBIs.

Kris Harvey, who is also 6-0 on the mound, is hitting .352 with seven homers and 29 RBIs. Centerfielder Garrick Evans, the reigning ACC Player-of-the-Week, has missed the last two games with an injury. His status is listed as day-to-day.

The Tigers sport a 3.88 ERA and .256 opponents’ batting average. They are also fielding at a .968 clip, committing just eight errors in the last 10 games.

The 1954 Clemson baseball team, who won the first ever ACC baseball title, and many of the players on that team will be in attendance for Clemson’s game against N.C. State on April 24. The 50th anniversary of the team’s title will be commemorated during pregame festivities. Not only did that team win the first ever ACC regular-season baseball title, it was the first Clemson sport to win an ACC title. Among the players on the team include former Major Leaguer Billy O’Dell and Doug Kingsmore, an All-ACC player who hit 10 homers in 1954.

Tigers Tough to Beat at Home Under Leggett

Even when an opposing ACC team is victorious at Clemson, it usually means that team only won one of three games. In 42 ACC home series under Leggett, Clemson has lost only two series, losing two of three to N.C. State in 1996 and getting swept by Florida State in 2002. Georgia Tech also split a pair of games in a rain-shortened series in the 1997 season.

Rolling Along at Home

After a 4-5 record in its first nine home games, Clemson has reeled off 11 straight wins at Doug Kingsmore Stadium to improve to 15-5 at home. The biggest reason for the home winning streak is the Tiger bats, who are hitting a combined .353 in the last 11 home games. They have also combined to hit 29 doubles, three triples, and 14 homers in the last 11 home games, meaning Clemson is averaging 4.2 extra base hits per game during that span.

Brad McCann’s has added four homers and 15 RBIs, while Lou Santangelo has three homers and 13 RBIs.

Clemson is 13-2 in 15 night games this year, including a 8-0 record at home. The Tigers are hitting .324 at night, compared to their opponents hitting just .242 at night. Clemson’s ERA is also 3.13 at night, compared to its opponents’ 7.17 ERA. Sophomore righthander Jason Berken has not allowed an earned run in 20.0 innings pitched (four starts) at night in 2004.

Jackson Has Carolina on His Mind

Righthander and tri-captain Steven Jackson returned for his senior year after being selected in the 32nd round by the Cleveland Indians in 2003. One of his goals was to finally pitch against South Carolina, a team he never faced in three previous years. He earned his chance when Clemson traveled to Columbia on April 14 to face the #6 Gamecocks. In his first start of 2004, Jackson pitched 6.1 innings, allowing three runs to earn the win, also his first of the season. Later in the week, he came out of the bullpen at #10 North Carolina. He pitched 1.2 scoreless and hitless innings in Clemson’s 4-2 victory in 10 innings. Then on April 21, he came in the game against Western Carolina in the ninth inning with runners on first and second with no outs and enduced a double play on his first pitch. He retired the next batter to get out of the inning. Clemson went on to score three runs in the bottom of the ninth to win the game. Therefore, he picked up wins against three Carolina teams, including two top-10 Carolina teams on the road, in the span of eight days.

The Summerville, SC native also made a rare plate appearance after Lou Santangelo go-ahead homer in the 10th inning of the April 18 game at North Carolina. Since Clemson had already lost its designated hitter, a pinch-hitter would have hit for the pitcher who had not batted since high school. But with Santangelo’s homer, Head Coach Jack Leggett wanted Jackson to close out the victory. Jackson slapped what looked like a single, but a nice play by the Tar Heel third baseman retired Jackson at first. Jackson did close out the game by retiring the three Tar Heels in order in the bottom of the 10th inning to preserve the Tigers’ 4-2 victory.