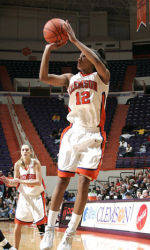 Clemson To Play Host To Georgia State On Saturday

CLEMSON, SC – The Clemson women’s basketball team will play host to Georgia State on Saturday afternoon at Littlejohn Coliseum. Tip off is slated for 3:00 p.m., a change for the originally scheduled time of 7:00 p.m.

Clemson Quick Notes* Clemson and Georgia State last met over 20 years ago, during the 1987-88 season. The Lady Tigers won that game, 96-64, to take a 4-1 lead in the series score.* Saturday’s game will be the first for the Panthers this season while Clemson will be playing its fourth of the 2008-09 season.* Georgia State will be the Lady Tigers’ first out-of-state opponent this season.*  Tasha Taylor currently ranks 9th in school history with 345 career assists* Taylor and Christy Brown both rank in the top six for career assists per game*  Lele Hardy’s 196 career steals are seventh in school history* Hardy holds the school record with a 3.06 career steals per game average* Clemson has nine players from the state of Georgia on its roster, which is tops in the nation for a school in a different state, according to a survey by the SID at George Mason* The Lady Tigers were predicted to finish ninth in the preseason ACC poll* Clemson returns nine letterwinners and has six freshmen for the 2008-09 season*  Sthefany Thomas spent her offseason traveling with the Argentinean national team to the South America Championships and the FIBA Olympic Qualifier* The 2008-09 Clemson women’s basketball roster has quite the athletic lineage. Six players have parents and/or siblings that also played a sport at the Division I level* McKinney and her staff signed North Carolina point guard Keyrra Gillespie on Nov. 12. Gillespie will join the Lady Tiger program for the 2009-10 season.

Series Notes* Clemson leads the all-time series score, 4-1, over Georgia State* Although the Panthers claimed the first match-up, an 83-78 decision in 1977, the Lady Tigers have won the last four meetings* The two teams have not faced off in over 20 years, when Clemson defeated Georgia State 96-64 during the 1987-88 season.