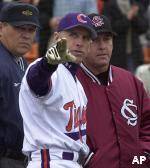 Clemson (20-6), ranked as high as #15, will travel to Columbia to take on #20 South Carolina (19-9) Wednesday at 7:00 PM at Sarge Frye Field in the third of four meetings between the two rivals. The game will be broadcast live on the radio by Clemson Tiger Sports Properties, Jim Phillips, and Bob Mahony, and can be heard live via the internet at www.clemsontigers.com. Live stats will also be available on Clemson’s website. Wednesday’s game will be broadcast live by Comcast/Charter Southeast as well. The two will again appear on Comcast/Charter Southeast in the final regular-season meeting next Wednesday at Clemson.

Clemson and South Carolina have met 261 times, with Clemson holding a 153-106-2 lead in the series dating back to 1899. The two have already played two games in 2003, with the home team winning each game. Clemson won 8-0 on March 1 thanks to Tyler Lumsden’s 7.1 shutout innings, while the Gamecocks won 6-4 on March 2 on Aaron Rawl’s complete game, exactly one month ago to the day of the team’s third meeting. Michael Johnson homered in Columbia earlier this season, giving him eight career homers against South Carolina. Tiger pitchers have held Gamecock hitters hitless in 13 at bats with runners in scoring position and a .193 overall batting average in the two games in 2003.

Clemson Head Coach Jack Leggett is 18-15 against South Carolina as the Tiger skipper and 21-23 overall. He is also 10-6 against the Gamecocks at Sarge Frye Field as the Tiger skipper, as opposed to just 8-7 at home at Doug Kingsmore Stadium. Leggett, in his 10th season as Clemson’s head coach, is 55-28 (.663) against SEC teams while at Clemson. He also has 114 victories over top-25 teams in his tenure in Tigertown.

The Gamecocks will start sophomore lefthander Matt Campbell (1-1, 5.52 ERA) on the mound. Campbell started on the mound in the first game between the two rivals on March 1 at Doug Kingsmore Stadium. He suffered the loss by allowing five hits, five earned runs, and four walks in 3.2 innings pitched. In 2003, he has struck out nearly 12 batters per nine innings pitched. Clemson’s starter has yet to be determined.

South Carolina, who is coming off a sweep of a Tim Corbin-led Vanderbilt team in Columbia over the weekend, is hitting .305, led by Brian Buscher’s .409 mark. He also has a team-high six homers and 28 RBIs. South Carolina has a 3.26 team ERA and 2.9 strikeout-to-walk ratio. South Carolina, who is 16-4 at home, also has a .968 fielding percentage. The Gamecocks have two players that are brothers of either current or former Tigers. Ryan Mahoney is the brother of current Tiger catcher Collin, while Mark Stanley is the brother of former Tiger outfielder Henr’ Stanley.

Clemson enters the game at #20 South Carolina with a .312 batting average and .971 fielding percentage. Russell Triplett is 17-for-28 (.607) in his last seven games and leads the team with a .394 batting average. Brad McCann has a team-high 31 RBIs, while Paul Harrelson’s 2.00 mark and team-high four saves.

Clemson got another good outing from Brad McCann two-out, two-run single. Meanwhile, Jackson allowed just two earned runs on seven hits to earn his third win. Paul Harrelson’s also earned his fourth save of the year by retiring the final two batters. The Tigers scored four of their five runs with two outs and had 10 hits, all singles.

In the March 31 release, his RPI index has Clemson #5, depsite the Tigers only being ranked as high as #15 in the polls. Clemson can thank a brutal non-conference schedule for its high RPI ranking, which already includes three games at Auburn (#1) and many other games against quality foes.

Clemson everyday shortstop Russell Triplett along with co-second basemen David Slevin and Herman Demmink have been solid in the field, but have been a big part of the offensive attack in the last four games. In those four games, the three have combined to go 21-for-37 (.568). Slevin, who has committed just one error this season, is 7-for-10 during that four-game stretch and has raised his average over 100 points to .271. Triplett leads the team with a .394 batting average, while Demmink is 5-for-11 (.455) in the last four games to raise his average to .340.