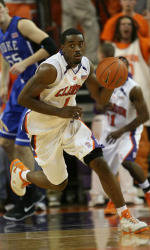 Clemson, SC – Clemson will face Michigan in the first round of the South Regional of the NCAA Men’s Basketball Tournament at the Sprint Center in Kansas City, MO on Thursday, March 19. Tip off is set for 7:10 PM ET.

Clemson is the seventh seed of the South Regional and Michigan is the 10th seed. The winner will play the winner of the Oklahoma vs. Morgan State game on Saturday, March 21 at the same facility.

Tickets for the Clemson vs. Michigan game are $63 each. IPTAY members may purchase tickets on Monday by contacting the Clemson Athletic Ticket Office at 1-800-CLEMSON. Tickets will go on sale to the general public on Tuesday. Clemson students may call or stop by the ticket office to purchase tickets.

This will be the third all-time meeting between Clemson and Michigan. The Wolverines hold a 2-0 lead in the series. An 11th ranked Michigan team defeated Clemson at the South Florida Invitational in Tampa, FL in December of 1987 by a 93-88 score, and downed Clemson at the 1998 Maui Classic by a 59-56 score.

This is Clemson’s ninth appearance in the NCAA Tournament, its second consecutive appearance. This is the first time Clemson has been chosen for the NCAA tournament in back to back years since it made three straight appearances between 1996-98. This will be the second time Clemson has been sent to Kansas City for its first and second round games. In 1997 Clemson defeated Miami (OH) and Tulsa in Kansas City to advance to the Sweet 16. The Tigers have an 8-8 all-time record in the NCAA tournament.

“We are proud to be selected to the NCAA tournament for the second consecutive year,” said Head Coach Oliver Purnell. “We put ourselves in position where we were watching the selection show to see where we would go and whom we would play, not to see if we got in the field. That is a testimony to our players and coaches.

“We have played a tough schedule down the stretch and know we will have to play well to beat Michigan. We have had many meetings and two good practices since the ACC Tournament loss to Georgia Tech. We know we need to make improvement.

“Michigan is a fine team with outstanding players. I saw them play against Duke earlier in the year on TV. It will be a tough assignment for us. We are familiar with their style because we played against Coach (John) Beilein’s West Virginia team in the finals of the NIT two years ago.”

The Tigers are led by second-team All-ACC forward Trevor Booker who has a 15.3 scoring average to go with 9.7 rebounds per game. Booker leads the ACC in rebounding and field goal percentage (.567) and is trying to become the first ACC player to lead the league in both categories since Tim Duncan of Wake Forest accomplished the feat in 1996-97.

K.C. Rivers, who scored 15 points in Clemson’s NCAA Tournament game against Villanova last year, has a 14.2 average to support Booker. Rivers also pulled down 5.9 rebounds per game and is Clemson’s career leader in three-point goals with 280. He led Clemson in scoring with 18 points against Beilein’s West Virginia team in the finals of the 2007 NIT. Rivers has 1,671 career points to rank sixth in school history.

Terrence Oglesby, a sophomore guard, is the third leading scorer for the Tigers with a 13.5 average. He ranks second in the ACC in three-point shooting and three-point goals per game. He has 176 three-point goals in just two seasons, including 91 this year, fourth highest total in Clemson history.

Michigan has a 20-13 record entering the NCAA tournament and had wins over UCLA, Duke, Illinois and Purdue during the regular season. The Wolverines are led in scoring by Manny Harris, a 6-5 wing who averages 16.8 points and 6.9 rebounds per game. He also leads the team in assists with 4.4 per game. DeSawn Sims is a 15.7 scorer who also collects 6-9 rebounds per game as a 6-8 forward.

Michigan starts four players who are 6-5 or shorter. Zack Novak is a 6-5 forward who averages 6.8 points per game, while Stu Douglass is a 6-3 guard with a 5.9 average. C.J. Lee is a 6-0 guard who rounds out the starting lineup with a 2.5 average.

Michigan and Clemson had four common opponents in Illinois, Duke, Maryland and Savannah State. Michigan actually played Duke more than Clemson did as the Wolverines split two games with the Blue Devils. Clemson won its only meeting with Duke by a 74-47 score. Clemson defeated Illinois in the ACC vs. Big Ten Challenge at Illinois in December by a 76-74 score, while Illinois beat Michigan two out of three games, including a 60-50 Illinois win in the Big Ten Tournament last week. Both teams beat Savannah State. Clemson beat Maryland by 29 points and Michigan lost to Maryland 75-70

Clemson has a 12-15 all-time record against Big Ten teams, but the Tigers and Oliver Purnell have won five straight against the Big Ten, all in the ACC vs. Big Ten Challenge.