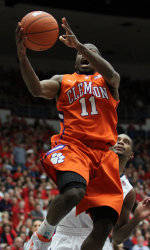 Clemson to Host Winthrop at 4:30 PM on Saturday

QUICK FACTS  Clemson and Winthrop square off for the 10th time in the series. The Tigers hold an 8-1 advantage all-time and won the most recent meeting between the two schools, 102-66 in the 2009-10 season.  Winthrop will be Clemson’s sixth in-state opponent in the Tigers’ first nine games this season.  The Tigers are 4-4 on the season and have had a week off due to final exams. Clemson last played on Dec. 10, suffering a 63-47 loss at Arizona.  The Eagles are 3-6 on the season and play Thursday night at Jacksonville. Winthrop is in the midst of four consecutive road games. The Eagles also play at Western Michigan on Dec. 20 and at Georgia on Dec. 27.  Clemson will play five games over the course of nine days, starting Saturday. By comparison, entering the game against Winthrop, Clemson played five games in 25 days.  Clemson is 19th in the latest NCAA statistical rankings in scoring defense, yielding just 56.4 points per game.  Andre Young has 192 three-point goals and needs eight to become the sixth player in school history with 200 in a career.  Young is just 73 points shy of scoring 1,000 career points.  Young is sixth among all Division I players with a 3.9 assist-to-turnover ratio.  Young had two steals at Arizona and now has 146 in his career, good for sole possession of 11th on Clemson’s all-time list.  Tanner Smith has led the Tigers in assists in four straight games and is third in the ACC averaging 4.6 per game.  Devin Booker needs just seven field goals for 200 in his career.  K.J. McDaniels and Bernard Sullivan both logged season-high minute totals at Arizona. McDaniels had his best offensive showing with seven points on 3-of-6 field goals.  Another freshman, guard T.J. Sapp, is the only one of the six first-year players to make a field goal in every game so far this season.  Rod Hall has just six turnovers in 174 minutes this season.  Catalin Baciu has averaged 7.3 points per game over the last three outings and has made 10-of-12 field goals in that span.  Clemson’s Earl Grant was an assistant coach at Winthrop under Gregg Marshall from 2004-07. He helped the Eagles to three straight NCAA Tournament appearances.

TICKET PROMOTIONS This game is designated Military Appreciation Day. All military members (past and present) are eligible for two free tickets as an appreciation of their service to our country. To redeem free tickets, military members need to identify themselves at the East Gate Box Office of Littlejohn Coliseum. The box office opens one hour prior to tipoff. There will also be special pre-game and halftime ceremonies honoring our military.

Also, members of the Tiger Letterwinners Association have the opportunity to attend three Clemson men’s basketball games to be played during the holiday season for free. The games honoring this promotion are: December 17 vs. Winthrop, December 19 vs. Alabama State and January 1 vs. East Tennessee State.

Letterwinners can receive free admission to these games by showing their Tiger Letterwinners ID card at the East Gate Box Office at Littlejohn Coliseum. In addition, letterwinners’ family members may purchase tickets for these games at a discounted rate of $10. Tickets are limited and based on availability.