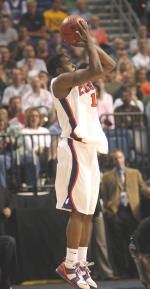 Clemson, SC – The men’s basketball team will host USC Aiken on Thursday in its only public exhibition game. Admission to the contest will be free to the general public. Tip-off is scheduled for 7:30 PM from Littlejohn Coliseum.

The Tigers return three starters and 11 lettermen from the 2007-08 team that won 24 games and finished with a #22 ranking in the AP poll. Clemson advanced to the NCAA Tournament last year, as well as to the championship game of the ACC Tournament. Under sixth-year Head Coach Oliver Purnell, the program has improved its winning percentage each of the last four seasons.

K.C. Rivers, recently named team captain, has led Clemson in scoring each of the past two seasons. He averaged 14.7 points and 6.3 rebounds per game last year and was a second-team All-ACC selection. Rivers was also named first-team All-ACC Tournament after scoring 28 points in the championship game against North Carolina.

Other returning starters for the Tigers are point guard Demontez Stitt and center Trevor Booker. A sophomore from Matthews, NC, Stitt started the first 20 games of last season and averaged 8.8 points per game. Booker holds career averages of 10.7 points and 6.9 rebounds per game and has started all 70 games in his two years at Clemson. He already ranks among the school’s top 10 in terms of field goal percentage and blocked shots.

USC Aiken comes into the 2008-09 season ranked as the nation’s #1 team in Division II by the Sporting News. The Pacers posted a school-record 27 wins last season and return four starters as the preseason favorite in the Peach Belt Conference. Chris Commons, a senior forward, was an NABC All-American last season for the Pacers after averaging 21.8 points per game.