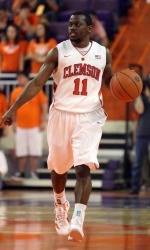 QUICK FACTS  Clemson and South Carolina meet for the 162nd time in men’s basketball Sunday at Littlejohn Coliseum. The Gamecocks own the series lead, 87-74, but the Tigers hold a 45-30 advantage over their in-state rival in home games.  The Tigers enter the game with a 4-2 record and defeated Iowa on the road, 71-55, as part of the Big Ten/ACC Challenge on Tuesday.  Clemson has now won four straight road games in the Challenge, the only school to accomplish the feat. The Tigers own five overall road wins in the event, more than any other school.  The Gamecocks are 2-5 on the season, most recently falling at home to Providence on Thursday in the Big East/SEC Challenge.  Clemson won six straight in the series from 2004-09, before South Carolina broke the streak last season at home with a 64-60 victory.  Clemson is coming off its best outside shooting performance of the season, as the Tigers made 11-of-21 from three-point range and shot 51.9 percent from the field against Iowa.  Clemson has held five of its six opponents to 60 points or less and is second in the ACC in scoring defense (55 ppg).  Andre Young made his last five three-point baskets against Iowa to match a single-game high. He now has 187 for his career, more than any other active player in the ACC.  With two steals against Iowa, Young tied former teammate Trevor Booker for 11th on Clemson’s all-time list with 144 career steals.  Young is among the ACC’s top 10 statistical leaders in points per game, assists per game, free throw percentage, three-point percentage, three-point goals per game, assist-to-turnover ratio, steals per game and minutes per game.  Tanner Smith has led Clemson in rebounding in four of the six games this season, posting a career-high 14 against both Gardner-Webb and Iowa.  Smith ranks third in the ACC in assists per game (4.8) and eighth in rebounds per game (7.7) and also leads the Tigers in field goal percentage (52.3) from a guard position.  Bryan Narcisse is tied for fifth in the ACC with 1.5 blocked shots per game, despite playing just 15.8 minutes per game.  Bobby Conrad, a member of the school’s all-time team and point guard on the 1980 Elite Eight squad, will serve as an honorary captain on Sunday.