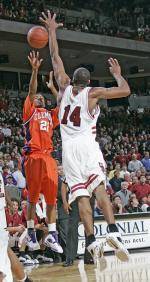 Clemson was ranked 19th by collegerpi.com and 24th by Sagarincomputer rankings entering games of December 12. Clemson freshmanCliff Hammonds has made 14 of his last 19 three-point attempts,including each of his last five. He missed his first eightthree-point attempts of the season and is now third in the ACC inpercentage with a .519 figure. Hammonds, who was co-ACC Rookie ofthe Week last week, has made 16 of his last 21 field goals attemptsover the last three games. Shawan Robinson is second in the ACC inthree-point field goal percentage with a .545 figure on 18- 33attempts. Sharrod Ford had 16 points and nine rebounds in theClemson’s win over Charleston Southern on Saturday. He made 7-11shots from the field an added four blocked shots. He now has 14blocks for the season and 123 for his career. He needs four blockedshots to move into fifth place on Clemson’s career list. This willbe Clemson’s first ever game against Norfolk State, but the Tigerssecond game this year agianst a team from the MEAC. Clemsondefeated Hampton in the season opener 98-54. All-time, Clemson is14-1 against schools from the MEAC with the most common opponentbeing South Carolina State. The Tigers are 6-1 against theBulldogs. Clemson has made 41.2 percent of its three-point shotsover the first six games, best in the ACC on a percentage basis.Clemson has not led the ACC in three-point percentage since thefirst year of the rule, 1986-87, when Clemson shot a record .447from long range as a team. Norfolk State has an even 3-3 record andthe record is nearly reflected in the point totals through sixgames. The Vikings have scored 396 points and given up 393, just athree-point scoring margin. Clemson has shot 52.3 percent from thefield for its four home games so far this year. That includes a.519 figure against Charleston Southern last Saturday. LittlejohnColiseum has been a shooter’s gym so far this year. The Tigers areshooting .433 at home on three-point shots and the opposition isshooting .440 for the four games. Clemson is 5-0 this year when itout-rebounds the opposition and 0-1 when it is the loser in therebound margin stat. Clemson has won the turnover margin stat infive of the first six games this year. Clemson was last in the ACCin turnover margin last year and won that statistic just four timesall season. Clemson leads the ACC in steals per game with a 13.50figure.