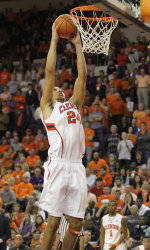 Clemson to Host No. 6/8 Duke on Sunday in Men’s Basketball

QUICK FACTS  Clemson and Duke meet for the 133rd time in the series on Sunday. The Blue Devils own a wide lead in the series, but it has been competitive over the years at Littlejohn Coliseum. Duke is 23-17 versus Clemson in Littlejohn.  The Tigers last defeated the Blue Devils in 2008-09 behind Trevor Booker. Clemson won 74-47, Duke’s worst loss since the 1990 National Championship game against UNLV.  Duke has won three straight in the series and 25 of the last 27 meetings between the two schools.  Clemson owns 13 wins over Duke teams that were ranked in the top 25 at the time of the meeting. That is the most top-25 wins for the Tigers versus one school.  Clemson has held three straight opponents and 10 overall this season to less than 60 points. The Tigers are 8-2 this season when holding the opposition to less than 60.  Clemson has converted a pair of four-point plays this season, the first time since the 2005-06 season the Tigers have made more than one in the same year. Tanner Smith made a four-point play against Southern Illinois, while T.J. Sapp converted in Clemson’s most recent game at Boston College.  Clemson has collected 32 steals over the past three games, an average of over 10 per game.  Andre Young needs just one trifecta Sunday to pass Shawan Robinson for fifth place on Clemson’s career leader list for three-point goals. The two are tied with 203 career threes.  Young will be presented a ball prior to lineup introductions commemorating his achievements as a member of Clemson’s 1,000 career point club.  Milton Jennings is averaging 12 points and 10 rebounds over his last two outings and has blocked at least one shot in four consecutive games.  Tanner Smith has had three or more steals in four of Clemson’s last six games, and five times overall this season.  After playing just 27 minutes over Clemson’s first 14 games this season, freshman guard Devin Coleman has logged 18 minutes in the last two games alone.  Former Clemson great Terrell McIntyre, who was named to the school’s all-time team as part of the 100th anniversary celebration, will be an honorary captain Sunday. He is No. 2 in Clemson history in points, assists and three-point goals.