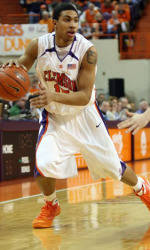 CLEMSON, SC – The men’s basketball team will take on Francis Marion on Friday in an exhibition game at Littlejohn Coliseum. Tipoff is scheduled for 7:30 p.m. The event is free to the public and seating is general admission.

Clemson returns a pair of starters and 11 lettermen from the 2008-09 team that won 23 games and finished with a No. 24 ranking in the Associated Press poll. Clemson advanced to the NCAA Tournament for the second straight year, the first time that has been accomplished at the school since 1997-98. Under seventh-year Head Coach Oliver Purnell, the program has improved its winning percentage each of the last five seasons.

Trevor Booker, Clemson’s leading scorer as a junior, returns for his senior season. Booker, who earlier this week was named a preseason first-team All-American by Basketball Times, averaged 15.3 points and 9.7 rebounds per game as a junior. The Whitmire, SC native was second-team All-ACC last season and is a candidate for the Naismith and Wooden awards.

Francis Marion is a Division II school out of the Peach Belt Conference. This is the third straight season the Tiger program has played a Peach Belt opponent in an exhibition. Clemson defeated Augusta State in 2007 and USC Aiken last season. The Patriots won 16 games a year ago and were picked to finish sixth in the Peach Belt this season.