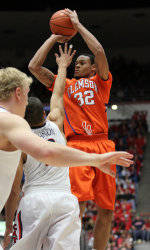 Clemson to Host Alabama State on Monday at 7:00 PM

QUICK FACTS  Clemson and Alabama State meet for the first time in series history on Monday. The Tigers are 22-19 all-time versus schools from the state of Alabama, most recently defeating UAB last season in the opening round of the NCAA Tournament in Dayton, OH.  The Tigers enter the game with a 5-4 overall record. Clemson is coming off a 60-40 win over Winthrop on Saturday, Dec. 17. The Tigers held Winthrop to 16 second half points and just 31 percent shooting for the game.  The Hornets are 2-7 on the season and are coming off a 65-35 loss at Saint Louis on Dec. 17.  Clemson’s defense has been good again in 2011-12, as the Tigers are yielding just 54.6 points per game to the opposition.  With the win over Winthrop, Clemson improved to 10-1 under Head Coach Brad Brownell when holding the opponent to 50 points or less, including 4-0 this season.  The Tigers are holding opponents to just 39.4 percent field goal shooting this season, and only 30.5 percent from three.  Andre Young has 194 three-point goals and needs six to become the sixth player in school history with 200 in a career.  Young is just 58 points shy of scoring 1,000 career points.  Tanner Smith tied a career-high with 17 points against Winthrop. He previously scored 17 against the same opponent, Long Beach State, as a sophomore and junior.  Smith is third in the ACC, averaging 4.7 assists per game. He has compiled 26 assists over the last five outings.  Catalin Baciu made his first career start in his 53rd game as a Tiger. He scored five against Winthrop and has now made 12 of his last 14 field goal attempts over the past four games.  Baciu needs just 17 points to match his three-year total entering his senior season (58).  Bernard Sullivan has played 31 minutes over the last two games. He had played just 28 minutes in Clemson’s first seven games.  Clemson’s three primary ball-handlers (Andre Young) have a combined 87-to-34 (2.56) assist-to-turnover ratio.  K.J. McDaniels is a native of Birmingham, AL. His father, Kevin, was a second-team all-conference player at South Alabama.