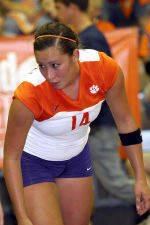 CLEMSON, SC – The Tiger volleyball team (8-4, 3-1 ACC) will welcome new ACC opponent Boston College to Jervey Gymnasium on Friday, Oct. 7. Clemson will then host 25th-ranked Maryland, on Saturday, Oct. 8. The Tigers will meet the Eagles at 7:00 PM and will take to the court against the Terrapins for a 6:00 PM match. Saturday’s match will be a competition between two of the top teams in the ACC, as Maryland enters the weekend ranked number one in the conference and Clemson is tied for second place.

The Tigers continued their blocking proficiency against Miami and Florida State last weekend, as they recorded 25 total team blocks on the road trip. Danielle Hepburn’s 56 total blocks and 1.33 block per game average are both team-highs, while Laura Boozer has a 1.11 mark, with 40 blocks in 36 games. The team has posted 124 total team blocks, compared to just 88 by opponents. Jeannette Abbott recorded her 200th kill of the season against Florida State and now has 205 total to lead Clemson. Setter Courtney Lawrence has 490 set assists for the season and a team-high 24 service aces. Libero Anna Vallinch leads the team with 207 defensive saves.

Clemson has faced Boston College three times in the program’s history and has been victorious each time. The most recent meeting between the two schools was during the 1995 season in the ACC-Big East Challenge. The Tigers won the match by a score of 3-0 on a neutral court. Clemson won the last match played in Jervey Gym, which was during the 1991 season, by the same score. Overall, Clemson is 2-0 against the Eagles in matches played on its home court.

Boston College has struggled early in its first season in the ACC, dropping its first five conference matches. The Eagles are 5-9 overall. Dorota Niemczewska leads the team with 142 kills and Allison Anderson has a team-high 209 defensives saves. Kelsey Johnson and Morgan Woodcock each have 27 total blocks to lead Boston College, and setter Verena Rost has recorded 461 set assists.

The series score between the Tigers and Terrapins is knotted at 25 wins apiece, and the teams split last year’s matches. Clemson defeated Maryland, 3-0, in College Park, MD, but fell to the Terrapins by a score of 3-1 at Jervey Gym. Maryland has edged the Tigers, 9-8, in matches played in Clemson, SC, including the 2004 contest.

The Maryland Terrapins entered the national rankings at #25 in the poll released on Oct. 4 and begin the weekend leading the conference with a perfect 14-0 record (5-0 ACC). They face Georgia Tech on Friday night before traveling to Clemson. The team leads the conference in three of the six statistical categories and has five hitters whose kills totals are separated by just 36. Rachel Wagener leads Maryland with 163, and Stephanie Smith, Maggie Schmelzle, Jade Brown and Beth Gillming all average over 2.00 kills per game. The Terrapins are averaging 1.98 service aces and 3.45 blocks per game. Schmelzle has a team-high 22 aces while Smith and Wagener have posted 78 and 76 total blocks, respectively.