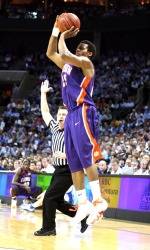 Clemson ACC Tournament History Notes *This is Clemson’s second appearance in the ACC Championship game, its first since 1962. That year Clemson defeated NC State in the first round, 67-46, the largest victory margin in an ACC Tournament game by Clemson until this year when the Tigers beat Boston College, then defeated eighth ranked Duke 77-72 in the semifinals. Clemson lost to Wake Forest and point guard Billy Packer in the championship game by a 77-66 score.

*Clemson is trying to become the seventh number-three seed to win the tournament, the first since Duke in 2005.

*With a berth in the finals, one would think Clemson would have a candidate for first-team All-ACC tournament. The last Clemson player to earn that honor was Terrell McIntyre in 1998. Clemson has never had two selections in the same tournament and has just four first-team All-Tournament selections in 54 previous events. Jim Brennan made the team in 1962 when he led the Tigers to the championship game.

* This year Clemson defeated Boston College 82-48 in the first round, then defeated seventh-ranked Duke 78-74. With six seconds left, Clemson had a 77-72 lead over Duke, so it was almost the same score against the same school with almost the same national ranking and the same tournament seed. But Cliff Hammonds hit a free throw and Duke scored a basket at the buzzer to make the final 78-74.

*Jim Brennan scored 34 points in that win over Duke in 1962, tied for the most points by a Clemson player in an ACC Tournament game. Brennan was Clemson’s top scorer in the championship game with 21 points. Len Chappell, who is Wake Forest legend representative at this year’s Tournament, led Wake Forest with 31 points. Brennan is a long time resident of Charlotte.

*This is just the second time Clemson has won two ACC games in the same ACC Tournament. The 1962 tournament was the only other year that took place.

*Clemson is now 16-54 in the ACC tournament in its history. Clemson had won just two ACC Tournament games in the last eight years and now has won two this year.

*Clemson has lost more games to North Carolina in ACC Tournament play than any other school. Clemson is 1-13 against the Tar Heels. The one victory took place in 1996 when the Tigers defeated North Carolina 75-73 on a dunk by Greg Buckner with just 0.6 seconds left.

*Clemson last played North Carolina in the ACC Tournament in 2005 in Washington, DC. Clemson had a 71-58 lead in that contest before losing 88-81. The current Clemson seniors were freshmen for that game.

*How many people attending this year’s ACC Tournament were in Reynolds Coliseum for the 1962 final? We don’t know for sure. But, Louise Bradley, widow of Clemson Sports Information Director Bob Bradley was at her first ACC Tournament in 1962, and she is with the Clemson contingent this year. She has missed just one ACC tournament in the last 46 years.

Clemson vs. North Carolina Notes *North Carolina has a 120-19 advantage in the series with Clemson, including a pair of overtime Tar Heel victories this season. North Carolina won at Clemson 90-88 in overtime on January 6 behind a three-point shot by Wayne Ellington with 0.4 seconds left. The Tar Heels won at Chapel Hill in double overtime by a 103-93 score. Clemson had the last possession to win the game at the end of regulation and the first overtime, but could not gain the victory.

*Clemson is 0-53 in Chapel Hill, the NCAA record for consecutive victories by one school over another at home.

*Tyler Hansbrough had his season high and season low in terms of scoring against Clemson this year. He had 12 points in the overtime game at Clemson on January 6 and had 39 points in the double overtime Tar Heel victory in Chapel Hill in February. His 39 points were the most points scored against an Oliver Purnell’s coached Clemson team (five years).

*North Carolina has beaten Clemson in basketball more than any other school (120). The Tar Heels have beaten Clemson eight consecutive games since Clemson’s last win, an 81-72 victory at Clemson during the 2003-04 season. Clemson shot 11-13 from three-point land in that victory during Oliver Purnell’s first season, a single game record for the Tigers program.

*Cliff Hammonds scored 31 points, his career high, in the game at North Carolina this year. He was 13-23 from the field, including 5-8 on three-point shots.

*Clemson has three natives of the Tar Heel state within the top 10 players. James Mays is from Garner, Demontez Stitt is from Matthews and K.C Rivers is from Charlotte.

* Purnell has defeated five Hall of Fame Coaches after they entered the Hall, including Duke Coach Mike Krzyzewski on Saturday. It was his first win over Coach K. He also defeated Denny Crum, John Chaney (twice) and Jim Boeheim last year. The Crum and Chaney victories came when he was head coach at Dayton. Again, this is a list of his wins against coaches who were already in the Hall of Fame at the time of the game. He also has wins over UCONN’s Jim Calhoun and North Carolina’s Roy Williams before they entered the Hall of Fame. Williams was inducted this past September.

*Oliver Purnell now has a 4-1 record in March and is 14-10 overall for the month in his Clemson career. He is the first Clemson coach since 1940 to have a winning record in March. He needs just one more victory to tie the Clemson coaching record for wins in the month of March. Cliff Ellis was 15-23 in March for his 10 years as Clemson head coach. Purnell is in his fifth year at Clemson.

Clemson Team Notes *If Clemson defeats North Carolina in the championship game it would give the Tigers at least one victory over every ACC team this year. Clemson has already beaten 10 different ACC teams for the first time in history.

*If Clemson can get a victory over North Carolina it would give them 12 wins against ACC teams this year. That would be the most wins over ACC teams in a season in school history. Clemson won 11 games, including one in the ACC Tournament in 1990.

*Clemson had lost 22 straight games to Duke by an average of 15.7 points before its semifinal victory on Saturday afternoon.

*Clemson has held opponents to 29.7 percent on three-point shooting, the best three-point defense in school history.

*This Clemson senior class now has 84 wins. A victory against North Carolina would set the school because the Tigers seniors of 1990 also won 84.

*The top two winningest players in Clemson history will be in the building on Sunday. When Clemson defeated Duke on Saturday it gave Cliff Hammonds 84 victories in a Clemson uniform, tying the record that had been established by Elden Campbell from 1986-90. Campbell is Clemson’s legend representative this year.

*The 24 wins this season stand in a tie for third in Clemson history. The record is 25, set last year and in 1986-87. Thus a win on Sunday would tie that win record for the second straight year.

*When Clemson defeated Boston College in the first round by 34 points, it tied for the largest victory margin for the Clemson program in a game against an ACC team. The Tigers also won by 34 points in 1974-75, 100-66.

*Clemson will not only face a number-one seeded North Carolina team on Sunday, the Tar Heels are also ranked number-one in the nation in both polls. This will be the second time Clemson has faced a number-one ranked Tar Heel team this year. North Carolina was number-one on Jan. 6 when they defeated Clemson 98-88 in overtime at Clemson.

Clemson Individual Notes *Cliff Hammonds set a Clemson record for playing time in a career in the win over Duke. He played 35 minutes in the game and has now played 4219 for his career, 19 more minutes than Terrell McIntyre played between 1995-99.

*Hammonds moved into 10th place in career scoring at Clemson when he scored seven points against Boston College. He now has 1450 career points. Tree Rollins is next on the list at 1463.

* Mays has scored in double figures in all six games since took off the cumbersome brace that protected his broken left hand. He has shot 33-58 from the field during that time, 57 percent and has scored 87 points for a 14.5 average. He shot 43 percent from the field and averaged 8.7 points per game with the brace.

*Clemson is now 9-3 since Sam Perry was inserted into the starting lineup on February 2 against Boston College.

*Clemson made 7 of its last 8 free throws in the win over Duke on Saturday. All seven made free throws were converted by seniors, including 4-4 by Cliff Hammonds.

*Raymond Sykes made 6-6 shots from the field against Boston College and has now made 11 consecutive shots from the field over four games. His last miss was in the second half at Maryland. He had the longest streak by a Tiger this year when he made 12 in a row from December 21 through December 29. He did not attempt a field goal in the win over Duke.

*Booker and Mays had quite a combined stat line on Saturday. Between the two of them they were 14-18 from the field, had 34 points, 11 rebounds and six assists against just two turnovers.

*Booker is now 21-33 from the field in three career ACC Tournament games.