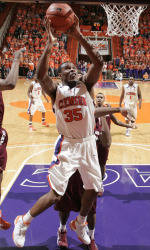 Quick Facts  Clemson will face Michigan in the first round of the NCAAAA Tournament. Clemson is 0-2 against Michigan lifetime, but has won five straight against Big Ten teams, including a 76-74 win at Illinois back on December 2, 2008

 Clemson averages 79.0 points per game, among the top 15 figures in the nation. Michigan has not allowed an opponent more than 78 points this year.

 Clemson has six active players who played in last year’s NCAA Tournament game against Villanova. K.C. Rivers had 15 points to lead Clemson in scoring in that game, while Demontez Stitt added 14, including 4-4 three-point goals.

 Clemson finished 24th in the final AP poll, the second straight year Clemson has been ranked, a first in school history.

 Clemson is 14-0 in non-conference games, including road wins over NCAAAA Tournament teams Temple and Illinois,

 Clemson faced Michigan head Coach John Beilein in the NIT finals when he was the head coach at West Virginia in 2007. West Virginia won that game in Madison Square Garden, 78-73.