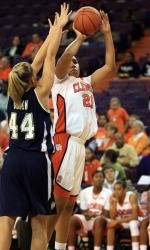 Clemson To Face Georgia Tech In Atlanta On Sunday

CLEMSON, SC – The Clemson women’s basketball team will travel to Atlanta on Sunday for a televised match up with Georgia Tech. The Lady Tigers (12-10, 2-6) and Yellow Jackets (15-5, 3-3) are slated for a 2:00 pm tip off from the Alexander Memorial Coliseum.

Clemson Quick Notes * Sunday’s game will be the fourth televised game for the Lady Tigers this season. With four still remaining on the schedule, it will be the most Clemson has appeared on TV since the 2002-03 season * Clemson has nine players from the state of Georgia on its roster, which is tops in the nation for a school in a different state, according to a survey by the SID at George Mason * Five of those players are from within about a half hour of the Atlanta area * Lele Hardy became just the 21st player in school history to score 1,000 career points in the Lady Tigers’ last game, scoring 13 against Virginia Tech to hit the mark. * Clemson will kick off its final regular season month on Sunday, following a very busy January. The Lady Tigers had a 3-7 record in their 10 games during the first month of the calendar year. Five of those games were played during an 11-day stretch * Lele Hardy ranks third in the ACC in rebounding with a 9.1 per game average; she also ranks fifth in scoring at 17.2 points per game * Hardy ranks 13th nationally in steals, through Jan. 25 games, and has scored in double figures in all but two games this season * Hardy holds the school record with a 3.01 career steals per game average * The Lady Tigers are ranked 90th in the RPI, according to realtimeRPI.com; * Taylor and Christy Brown both rank in the top six for career assists per game * Lele Hardy 250 career steals are fourth in school history * Taylor ranks fourth all-time with 415 career assists * Tasha Taylor graduated on Dec. 18 with a degree in sport management * The Lady Tigers won five straight games from late November to mid-December after trailing at halftime, a program first * With a 8-2 record though the first 10 games of the season, Clemson had its best start since the 2003-04 season and its best record through 10 games under Head Coach Cristy McKinney * Clemson is now 2-1 in overtime games under Cristy McKinney and 19-15 all-time with the overtime win over Northwestern on Dec. 6. * Clemson won the Husky Classic over the Thanksgiving weekend Lele Hardy was named the MVP of the Husky Classic while Whitney Hood was selected to the all-tournament team * Lele Hardy 32 points against Georgia State on Nov. 22 were the most for a Lady Tiger in five years.

Series Notes * Clemson and Georgia Tech will be meeting for the 60th time in a series that dates back to 1980. * The Lady Tigers won that first match-up and own a 41-18 all-time advantage over the Yellow Jackets. * However, Georgia Tech has bested Clemson in each of the last five games, including a pair last season. * The Lady Tigers’ last win in the series was a 72-68 decision at Littlejohn Coliseum during the 2005-06 season. * They last defeated the Yellow Jackets in Atlanta in 2003-04.