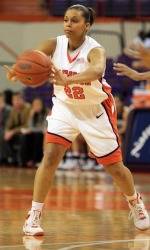 Clemson To Face Florida State In Televised Contest On Sunday

CLEMSON, SC – The Clemson women’s basketball team will take on Florida State on Sunday afternoon in its first televised contest of the 2008-09 season. The Lady Tigers are 10-5 on the year with a 1-1 record in conference play, while the Seminoles boast a 13-4 ledger that includes an upset of then-ranked #3 Texas A&M. The game is slated for a 3:00 pm tip off from the Donald L. Tucker Civic Center in Tallahassee, FL.

Broadcast Notes * The game will be televised on the ACC’s regional network which includes Fox Sports Net South, Fox Sports Net Florida, Comcast SportsNet and the New England Sports Network * Mac McDonald and Charlene Curtis are the announcing team * The game will be broadcast on the radio on the Clemson Tiger Sports Network * Don Munson will call the play-by-play with Kanetra Queen providing color commentary * Livestats will be available on www.clemsontigers.com

Clemson Quick Notes * The Clemson-Florida State series has been one of streaks throughout history with the Lady Tigers winning 23 of the first 24 games and the Seminoles claiming 11 of the last 12 * Lele Hardy leads the ACC in rebounding with a 9.0 per game average; she also ranks fourth in scoring at 17.5 points per game * Sthefany Thomas is the lone native of the Sunshine State on the Clemson roster, hailing from Wesley Chapel, which is near Tampa * Sunday’s game will be the first televised contest for the Lady Tigers this season * The Lady Tigers are ranked 84th in the RPI, according to realtimeRPI.com; Florida State is listed at #23 by the same website * Clemson’s 14-15 night from the foul line against North Carolina ranked in a tie for fourth in school history * Tasha Taylor graduated on Dec. 18 with a degree in sport management * The Lady Tigers won five straight games from late November to mid-December after trailing at halftime, a program first * With a 8-2 record though the first 10 games of the season, Clemson had its best start since the 2003-04 season and its best record through 10 games under Head Coach Cristy McKinney * Clemson is now 2-1 in overtime games under Cristy McKinney and 19-15 all-time. * Clemson won the Husky Classic over the Thanksgiving weekend, defeating Kent State and host-Washington Lele Hardy was named the MVP of the Husky Classic while Whitney Hood was selected to the all-tournament team * The Lady Tigers committed just seven turnovers against Winthrop on Nov. 25, which was the second fewest all-time * Lele Hardy 32 points against Georgia State on Nov. 22 were the most for a Lady Tiger in five years. * Taylor and Christy Brown both rank in the top six for career assists per game * Lele Hardy 230 career steals are fifth in school history * Hardy holds the school record with a 3.03 career steals per game average * Clemson has nine players from the state of Georgia on its roster, which is tops in the nation for a school in a different state, according to a survey by the SID at George Mason

Series Notes * Sunday will be the 37th meeting in a series that dates back to 1980. * Clemson won 23 of the first 24 match-ups while the Florida State has been the victor in 11 of the last 12. * The Lady Tigers posted a come-from-behind win in Tallahassee to end the 2007-08 regular season, erasing a 14-point halftime deficit to win the game on a last second shot by Morganne Campbell. * Overall, Clemson leads the series by a 24-12 margin with an 11-6 record in games played on the Seminoles’ home court.