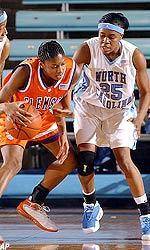 CLEMSON, S.C. – The Clemson Lady Tiger basketball team will play Charlotte in the first round of the Women’s National Invitational Tournament at Littlejohn Coliseum Wednesday night (March 17) at 7:00 p.m.

Ticket prices are $10.00 for adults and $5.00 for Clemson and Charlotte students, high school age and under, and groups of 10 or more. Because this is post-season play, Clemson students and faculty must purchase tickets.

The Women’s National Invitation Tournament is an annual tournament involving 32 teams. The event is a single-elimination format and all games, including semifinals and championship, will be hosted by participating schools at their home facility.

This will be the 10th meeting between Clemson and Charlotte on the basketball court. The Lady Tigers lead the overall series 9-0.

Clemson Head Coach Jim Davis is making his 16th postseason appearance in his 17-year career at Clemson. He has been to 14 NCAA Tournaments and will be making his second trip to the WNIT.

Clemson is making its fourth WNIT appearance. Clemson appeared in the 1980, 1984, and 1995 tournaments. Overall, Clemson has a 5-4 record in the WNIT. Clemson was 1-2 in the 1980 tournament and 2-1 in the 1984 WNIT for a third place finish. In 1995, Clemson was 1-2. Beginning with the 1998 WNIT, the tournament was a single elimination event. In Clemson’s previous appearances eight teams were invited and each team played in three games and finishes one through eight were decided.

“We are excited about this opportunity,” said Clemson Head Coach Jim Davis. “It is an opportunity for our seniors to extend their careers, and it will be a learning experience for our younger players. Coach Katie Meier has done a really great job in resurrecting the Lady 49er program.”

Charlotte is 16-13 overall and finished 8-6 in Conference USA. Sakellie Daniels leads Charlotte in scoring with an 11.9 ppg. average. Pam Brown leads the 49ers in rebounding (5.2 rpg.).

Probable Lineups for the Clemson-Charlotte Game