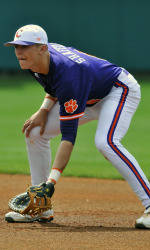 Clemson to Face Charlotte on the Road Tuesday; Georgia Southern at Home Wednesday

Clemson vs. Charlotte & Georgia Southern Clemson (13-1), ranked as high as #7 in the nation, will play at Charlotte (7-4) on Tuesday at 6:00 PM and host Georgia Southern (8-8 entering its game at Kennesaw State on Tuesday night) on Wednesday at 6:30 PM. Both games will be broadcast live on the radio by WCCP (104.9 FM) out of Clemson and can be heard live on the internet at ClemsonTigers.com for both midweek games as well.

The Series (Charlotte) Clemson and Charlotte have met 13 times on the diamond, with the Tigers holding an 11-2 lead in the series dating back to the 1985 season. The two squads opened the 2009 season at Doug Kingsmore Stadium in Clemson, as the Tigers swept the three-game series over the 49ers by a combined score of 18-8. The last meeting between the two teams at Charlotte came on March 5, 1988. Clemson was victorious that day by a score of 9-4.

Clemson holds a 3-0 lead in games played in Charlotte. Jack Leggett is 5-1 against the 49ers as Clemson’s head coach, but he has never faced them away from home. Leggett was 1-4 against Charlotte as the head coach at Western Carolina, therefore he is 6-5 all-time against the 49ers.

The Series (Georgia Southern) Clemson and Georgia Southern have met 78 times on the diamond, with the Tigers holding a 50-27-1 lead in the series dating back to the 1959 season. The two teams last played on March 14, 2007 at Doug Kingsmore Stadium. The Tigers won that game by a score of 3-0 and held the Eagles to three hits.

The Starting Pitchers (Charlotte) The 49ers have yet to determine their starting pitcher.

The Tigers will start senior righthander Justin Sarratt (1-0, 8.38 ERA) on Tuesday. The Gaffney, SC native has made three relief appearances and two starts for a total of 9.2 innings pitched. He has allowed 12 hits (.300 opponents’ batting average) and four walks with six strikeouts.

The Starting Pitchers (Georgia Southern) The Eagles have yet to determine their starting pitcher.

The Tigers will start freshman righthander Scott Firth (0-0, 0.00 ERA) on Wednesday. The Buffalo Grove, IL native, who will be making his first career start, has made four relief appearances for a total of 4.0 innings pitched. He has allowed three hits (.188 opponents’ batting average) and two walks with six strikeouts.

The 49ers Charlotte, led by 18th-year Head Coach Loren Hibbs, enters Tuesday’s game against #7 Clemson with a 7-4 overall record after splitting a pair of games against Austin Peay at home on Friday and Saturday. The 49ers are 7-3 at home as well.

Charlotte is averaging 9.5 runs per game and hitting .353 with a .483 slugging percentage and .446 on-base percentage. The team has totaled 25 doubles, two triples, seven home runs, and 15 stolen bases.

Ryan Rivers is hitting a team-best .513 with two homers, seven doubles, 16 RBIs, and a .623 on-base percentage, while Shane Brown is hitting .471. Corey Shaylor is batting .393, Zane Williams is hitting .361 with three homers and 16 RBI, and Cory Tilton has a team-high five stolen bases.

The Eagles Georgia Southern, led by 11th-year Head Coach Rodney Hennon, enters Tuesday’s game at Kennesaw State with an 8-8 overall record and 2-1 SoCon mark after winning two of three games at home against Appalachian State over the weekend. Hennon played two seasons (1990,91) at Western Carolina under Head Coach Jack Leggett. The Eagles are 1-1 on opponents’ home fields as well.

A.J. Wirnsberger is hitting a team-best .345 with four homers, five doubles, and 13 RBIs. Kyle Blackburn is batting .306 and leads the team in both homers (5) and RBIs (25). Shawn Payne has added a team-high nine steals in nine attempts as well.

The pitching staff has a 5.66 ERA and .310 opponents’ batting average along with 129 strikeouts against 67 walks in 143.0 innings pitched. Senior lefthander Dexter Bobo has three of the team’s five saves in nine relief appearances. The Eagles are fielding at a .958 clip as well.

The Tigers are averaging 9.4 runs per game and hitting .304 with a .509 slugging percentage and .416 on-base percentage. Clemson has also totaled 28 doubles, one triple, 23 homers, and 25 stolen bases.

Kyle Parker is hitting .396 with six homers, 16 RBIs, and a .515 on-base percentage, while Jeff Schaus is batting .373 with four homers and 23 RBIs. John Hinson is also batting .407 with four steals, while Chris Epps has a .460 on-base percentage and a team-high six stolen bases.

The pitching staff has a 3.26 ERA and .236 opponents’ batting average. The staff has allowed 41 walks against 95 strikeouts, good for a 2.3-to-1 strikeout-to-walk ratio. Freshman righthander Alex Frederick have both made seven relief appearances and have one save apiece. The Tigers are fielding at a .957 clip as well.

Worth Noting  Clemson leadoff batters of an inning have reached base 53 percent of the time this season.

Polls The Tigers remained at #7 in the Sports Weekly coaches poll this week after going 4-0 in four games last week. The Tigers also moved up one spot to #11 in the Baseball America poll and moved up three spots to #10 in the Collegiate Baseball poll. Clemson’s #7 ranking is its highest since June of 2007.

Loaded Stat Clemson has done a lot of damage with the bases loaded this year. Despite starting the year just 1-for-7 in that situation, Clemson is 7-for-18 (.389) with three grand slams, two doubles, 30 RBIs, seven walks, and one hit-by-pitch in 2010. The Tigers also have a 1.000 slugging percentage and a .556 on-base percentage with the bases full.

Chris Epps and Brad Miller have also hit one grand slam apiece in 2010.

Hinson Emerges After Injury Sophomore infielder John Hinson (Asheville, NC) missed all of 2009 with a back injury after he was slated to compete for the starting job at third base. But Hinson has emerged in 2010 and put up strong numbers. In 11 games (four starts), he is hitting .407 with one homer, two doubles, seven RBIs, and four stolen bases.

He was a big reason the Tigers swept the three-game series against N.C. State on March 13,14. In the final two games of the series, he came off the bench in both games and tallied two hits in each contest. In game-two with the Tigers trailing 6-5, he started Clemson’s seven-run eighth inning with a leadoff double, then capped the scoring with a three-run double later in the frame, as the Tigers were victorious 12-6. In the series-finale a day later, he went 2-for-2. With Clemson behind 6-5, he hit a one-out single in the eighth inning and eventually scored the tying run, as the Tigers scored two runs in the frame and won 7-6.

Tigers Sweep Wolfpack to Open ACC Slate Clemson, ranked as high as #7 in the nation, swept N.C. State by a combined score of 31-19 in a three-game series at Doug Kingsmore Stadium on March 13,14. The Tigers outhit N.C. State .314 to .267 and totaled four homers, eight steals in eight attempts, and a .466 on-base percentage thanks to 26 walks and three hit-by-pitches. Jeff Schaus and Brad Miller both added a homer and six RBIs. The Tigers had a 4.33 ERA as well.

In game-one on March 13, which was the first game of a doubleheader, Clemson scored 10 runs in the first four innings and held on for a 12-7 win over N.C. State. Kyle Parker hit a two-run homer in the first inning to tie the score, then Miller blasted a grand slam in the third inning. Parker was 3-for-4 with a homer, two RBIs, four runs, and one walk to pace Clemson’s 13-hit attack. Miller added two hits and five RBIs, while Shaffer went 3-for-5 with two RBIs. Clemson also stole four bases and walked seven times. Starter Casey Harman pitched 6.0 effective innings to earn the win.

In game-two on March 13, which was the second game of a doubleheader, Clemson scored seven runs in the eighth inning to rally for a 12-6 win over N.C. State. Drew Poulk’s two-run homer in the seventh inning gave the Wolfpack a 6-4 lead. But trailing 6-5 in the eighth inning, Clemson tied the score when Schaus walked with the bases loaded, then Wilson Boyd hit a two-run single to give Clemson the lead for good. Hinson, who started the inning with a double, added a three-run double to add three insurance runs in the eighth inning. Boyd had a game-high four RBIs, while Schaus and Hinson both added three RBIs apiece. Reliever Dominic Leone earned his first career win by tossing 3.0 scoreless innings of two-hit ball with six strikeouts.

In game-three on March 14, Clemson scored two runs on bases-loaded walks with two outs in the eighth inning to defeat N.C. State 7-6. The Tigers jumped out to a 4-1 lead in the second inning thanks to two-run singles by Jason Stolz and Schaus. But the Wolfpack chipped away and took a 6-5 lead with two runs in the seventh inning. The Tigers, however, loaded the bases with two outs, then Schaus and Parker both drew walks to tie the score and give Clemson the lead, respectively. Schaus had a game-high three RBIs, while Hinson came off the bench to record two hits. Freshman Jonathan Meyer earned his first career win by retiring all six batters he faced to close out the game.